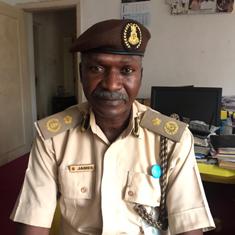 The Public Relations Officer of the Nigeria Immigration Service (NIS) Deputy Comptroller of Immigration (DCI), Sunday James has stated that migration management contributes to the economic development and prosperity of nations, which opens their borders for regular migration,

He said this while delivering a paper titled, “Migration Management and the Economy: The Role of the NIS” at the day 1 of the virtual summit with the theme, Migration; Post COVID-19 Era: The Role of Stakeholders” organised by Journalists International Forum for Migration (JIFORM).

The contribution, he explained could be  in the form of Foreign Direct Investments (FDIs) of nations which according to him is not possible with nations that closes its borders against regular migration, especially conservative policy and self isolated countries that does not relate in terms of economy with others.

He added that countries that does not relate in terms of economy with others, may survive but with little or no developments, considering the fact that globalisation has turned the world into a global village.

Migration management, he said remains the core operational assignment of migration managers all over the world, adding NIS lead other agency such as, National Agency for Prohibition of Trafficking in Persons(NAPTIP) in charge of an arm of migration which has to do with trafficking in person, international bodies like the International Organization for Migration (IOM), European Union Agency for Law Enforcement Cooperation (EUROPOL), International Criminal Police Organization(INTERPOL) and other international organisations and professional bodies saddled with migration management such as Nigeria Diaspora Commission (NIDCOM).

NIDCOM liaises between the government of Nigeria and Nigerians in the Diaspora for their well-being, welfare outside Nigeria and their possible return in case of eventualities that threatens life and their peaceful and safe survival outside Nigeria such as Xenophobic attacks, Ebola in the past, war, crisis situations in the country, where they resides and most recently COVID -19, pandemic that has locked down world economy and threatens human existence

He submitted that from the above explanation, “we can deduce the relationship between migration management and the economy of nations.”

On whether there is concrete synergy between NIS, IOM and INTERPOL, as it concerns migration, the NIS spokesman said, “IOM have been long time development partners of NIS. We do more of developmental activities and advocacy on regular migration and effective control of migration and training programmes.

On INTERPOL, he said, “I was the first desk officer for two years between 2012–2014, culminating in the robust relationship and trust between NIS and INTERPOL. Today, we have INTERPOL platform at NIS Headquarters, Abuja. We work real time online with the National Central Bureau.”

Be the first to comment on "Migration Mgt. Contributes To Economic Development Of Nations With Open Borders—NIS, Spokesman"