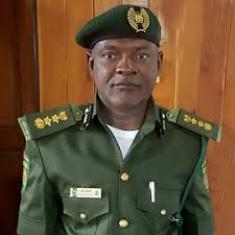 The Conservator General (CG), National Park Service, Dr Ibrahim Goni, has warned that the world cannot afford another zoonotic disease now while still battling with the scourge of COVID-19.

Goni, who gave the warning in a statement issued by his Media Assistant, Mr. Yakubu Zull, was reacting to the recent report of dead fishes washed ashore by waves in Rivers and Bayelsa States.

The areas reported to have been most affected are communities in Bonny and Andoni in Rivers State and in Foropa and Sangana in Bayelsa state.

He said that Zoonotic diseases are naturally transmitted from vertebrate animals to humans and vice-versa just like COVID-19, adding that some don’t make the animal sick but will make humans sick.

“Animals can sometimes appear healthy even when they are carrying germs that can make people sick, depending on the zoonotic diseases.

“Zoonotic diseases range from minor short-term illness to a major life-changing illness that can even cause death,” Goni said.

The C-G described the incident as an imminent health danger not only to the lives of other important aquatics in the coastlines, but also the residents of the areas.

He commended the residents and some patriotic Bonny men, who carried out preliminary investigations into the incident that revealed the species of the affected fish as Croaker.

According to the reports, the fishes appeared to be contaminated by some sort of chemical as some of them were swollen, excreting pus from their dead bodies, turned green and had a pungent odour, even from a distance.

Goni warned that such fishes should not be allowed to enter the markets of the affected communities as that will pose a serious danger to their health.

According to Goni, “With a massive and rising death toll, and crumbling economic and education systems, the world has already taken serious hits from COVID-19. Any possible further incident must be quickly brought under control so as to nip in the bud another zoonotic disease – this time originating from Nigeria”.

He, however, called for a more comprehensive investigation into the incident by all relevant stakeholders to forestall the surge of yet another zoonotic disease in the country.

In his words, ‘There should also an immediate plan by experts to mop up the fishes that were reported to have entered some markets in Port Harcourt city. The affected shores should be cleared before the bodies of the fishes become an environmental disaster’’.

“Animals should be handled by experts and, more importantly, requires collaborative, cross-sectoral efforts of human and animal health systems.

“This multidisciplinary approach includes considering the complexities of the ecosystems where humans and animals coexist,” he said.