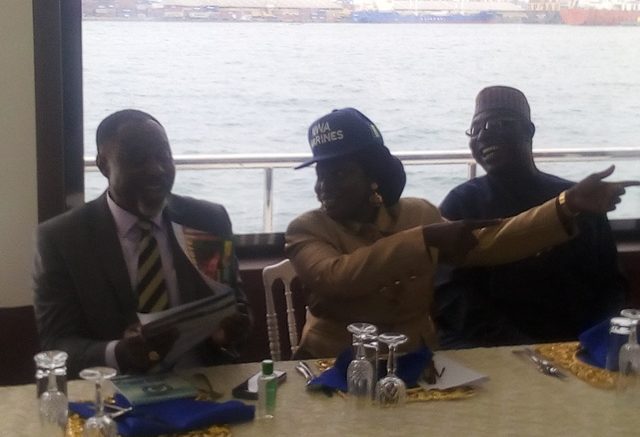 * from left: MD/CEO,NIWA,George Moghalu , the Area Manager of NIWA,Lagos, Sarat Braimah(in fez cap) and an official of NIWA at the stakeholders meeting today in Lagos

…To Compile A Comprehensive List Of Dredgers In Lagos

…As Stakeholders Advocate For Revolving Fund To Assist Boat Operators

As part of efforts to ensure the development and harnessing of the abundant potential in the Nigerian waterways, the National Inland Waterways Authority (NIWA) has stated that it was committed to partner with stakeholders to build the industry.

This is just as stakeholders in the waterways business advocated for revolving funds that would assist boat operators to secure boats for their operations instead of using rickety equipment that are not certified by the regulatory body, thereby undermining safety.

The Managing Director of NIWA, George Moghalu, stated this while speaking at a stakeholders meeting in Lagos today.

The NIWA boss added that the several opportunities that abound in the industry have not been tapped, adding that continuous  dialogue with stakeholders in the sector would further open the doors for other investors to come in.

Speaking further, Moghalu pointed out that there are a lot of challenges in the sector, just like any other sector of the economy, adding that it should not be left for the Federal Government alone  to address but that it also need the contributions of the industry stakeholders.

To buttress, the NIWA boss reminded the stakeholders that the 2020 budget which is being funded from the money from oil at $57 but that today the price of oil has dropped to $33 per barrel.

This, he said calls for concern, stressing that this challenge needs the input of everyone and that “we must look for a way to fund the budget”.

According to him, “NIWA is determined to team up with stakeholders to build and develop the inland waterways industry. We are open for discussion and we want to achieve the best.

On the rift between NIWA and the Lagos State Inland Waterways (LASWA), as it concerns inland waterways, Moghalu said that the issue was being addressed at the highest level.

He also said that he has also spoken with Managing Director of Nigeria Ports Authority (NPA), adding that the two agencies do not need to bicker, most especially when they are from the same parents.

Speaking on the activities of the dredgers, which one of the stakeholders complained about, Moghalu, said that he has directed the Area Manager to compile a comprehensive list of dredgers in Lagos State and their locations.

The essence of this , he stated was to standardise the process and that  NIWA is encouraging and laying emphasis on maintenance dredging.

According to him, “I want to say that by a press of the button know the dredgers in Lagos and where they are operating.”

Meanwhile, stakeholders in the industry has urged NIWA to consider the idea of having a revolving fund that would ensure that boat operators are able to purchase certified boats to operate.

He listed some of the actions NIWA has taken to reduce boat mishap in the country’s waterways to include: