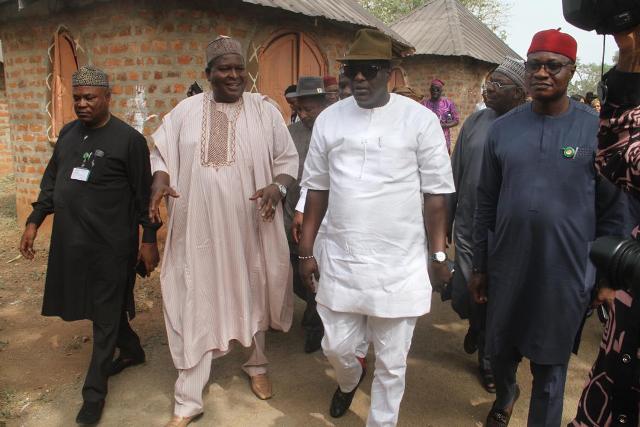 * Director-General, NCAC, Otunba Segun Runsewe(2nd left) taking members of the House Committee on Culture and Tourism led by the Chairman, Hon. Ogbeide Ihama (3rd left) on an inspection tour of the Art and Crafts Village in Abuja

The National Assembly has commended the concerted efforts of the Inspector General of Police, Mohammed Adamu and Director-General, National Council for Arts and Culture, Otunba Runsewe for ensuring the protection of public utilities.

Members of the House Committee on Culture and Tourism led by the Chairman, Hon. Ogbeide Ihama denounced a situation, where private individuals convert government property for personal use extolling the IGP and Runsewe for securing the permanent site of NCAC located in Abuja. Ihama said both men have remained unwavering in their commitment to protecting government properties citing the Art and Crafts Village belonging to NCAC as an example.

According to the members, who visited the premises as part of an inspection visit, the NASS was pleased with efforts made so far by Runsewe to refurbish the Art and Crafts village expected to generate thousands of jobs when completed.

The honourable members further harped on the need to secure and maintain such places as the NCAC cultural site which was almost taken over by some self-serving individuals for selfish gains until Runsewe, upon assuming office decided the party was over. * Chairman,House Committee on Culture and Tourism, Hon. Ogbeide Ihama, the DG, NCAC,  Otunba Segun Runsewe and other members of the Committee briefing the media shortly after inspecting the Art and Crafts Village in Abuja

They expressed full support of the federal government as the council seeks to reopen the village for the benefit of Nigerians.

Runsewe led the honourable members along with members of his management team around the village explaining that no stone will be left unturned in a bid to rebuild the place to meet with international standards.

Be the first to comment on "NASS Commends IGP, Runsewe For Protecting Government Property"