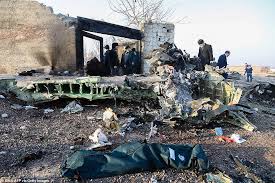 Sources say that the victims of the crash are from seven countries:

A statement by the airline revealed that aircraft was built in 2016 and delivered directly to the airline from the manufacturer.”

The airline also confirmed that three minutes after takeoff the plane disappeared from radar.

The airline explained that the flight departed Tehran International Airport at 6:10 a.m.

Meanwhile, the airline has suspended all its flights to Tehran until further notice.

The statement said that Ukraine International Airlines expre7ssed its deepest condolences to the families of the victims of the crash and will do everything possible to support them.

The airline added that it is currently clarifying the exact number of passengers on board after preliminary data said there were 167 passengers and nine crew members on board.

A spokesperson for Ukraine an u Airlines told a press conference that the plane was last checked on January 6 and there have been no complaints previously in relation to the jet.

Be the first to comment on "Ukrainian B737 Aircraft Crashes In Iran, 176 Passengers Dead"