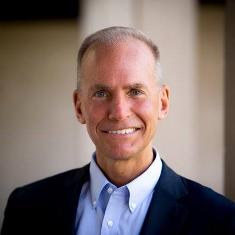 Calhoun takes over from Dennis Muilenburg, who resigned from his positions as Chief Executive Officer and Board Director effective immediately.

Calhoun will remain a member of the Board. In addition, Board member Lawrence W. Kellner will become non-executive Chairman of the Board effective immediately.

The Board of Directors decided that a change in leadership was necessary to restore confidence in the company moving forward as it works to repair relationships with regulators, customers, and all other stakeholders.

Under the Company’s new leadership, Boeing will operate with a renewed commitment to full transparency, including effective and proactive communication with the FAA, other global regulators and its customers.

“On behalf of the entire Board of Directors, I am pleased that Dave has agreed to lead Boeing at this critical juncture,” Kellner said.

“Dave has deep industry experience and a proven track record of strong leadership, and he recognizes the challenges we must confront. The Board and I look forward to working with him and the rest of the Boeing team to ensure that today marks a new way forward for our company,” he added.

“I strongly believe in the future of Boeing and the 737 MAX. I am honored to lead this great company and the 150,000 dedicated employees who are working hard to create the future of aviation,” Calhoun said. He succeeds Anne Toulouse, who previously announced her plans to retire in early 2020.

Golightly, 61, will report to interim CEO Greg Smith initially, and then to President and CEO David Calhoun from Jan. 13 onward.

Golightly will serve on the company’s executive council and be based in Chicago.

“Niel is a world-class communications professional with deep knowledge, expertise and relationships acquired over an accomplished career in both the private and public sectors,” said Smith.

“Importantly, he shares our values of safety, quality and integrity, and as a former Navy fighter pilot, Niel brings a deep passion for aerospace and Boeing’s mission. We are excited to welcome Niel to the team as we work together to safely return the 737 MAX to service, restore trust with our key stakeholders around the globe, and continue to build our future,” Smith added.

In that role he was responsible for developing and implementing FCA’s overarching corporate communications strategy, overseeing media relations, leadership and employee communications, and working alongside the company’s CEO and leadership team.

Prior to his corporate experience, Golightly served for 14 years in the U.S. Navy, including as a fighter pilot and as speechwriter to the Secretary of the Navy and the Chairman of the Joint Chiefs of Staff.

He received a bachelor’s degree in liberal arts from Cornell University and later studied at the University of Konstanz in Germany as a Navy Olmsted Scholar.

As the top U.S. exporter, the company supports commercial and government customers in more than 150 countries.

Be the first to comment on "Boeing Announces Leadership Changes"