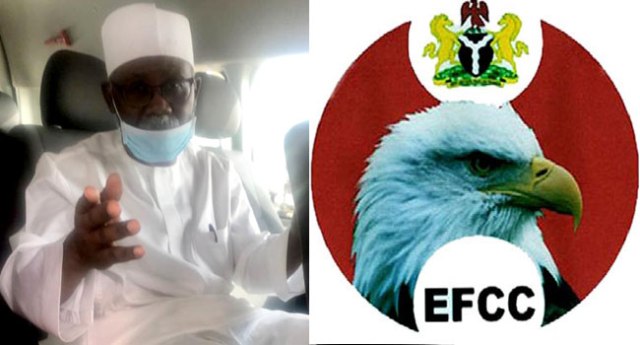 * EFCC’s logo and a pix of the fmr. Attorney General of the Federation (AGF) and Minister of Justice, Mr Mohammed Adoke, shortly after he returned to Nigeria on board Emirates Airlines Flight 785 today . * Source: Twitter handle- @officialEFCC.

The International Police Organisation (INTERPOL) has handed the former Attorney General of the Federation (AGF) and Minister of Justice, Mr Mohammed Adoke, over to the Economic and Financial Crimes Commission (EFCC).

Adoke, who returned to Nigeria on board Emirate Airlines Flight 785 today, was handed over to EFCC by INTERPOL.

INTERPOL said that the international organisation handed over former AGF and Minister of Justice, Adoke as requested by Nigeria’s anti graft organisation.

After the handover of the former AGF, he was taken into custody by the EFCC for allegedly granting of the Oil Prospecting License (OPL) 245 to Shell and ENI.

Adoke , who has been away from the country since May 2015,is wanted for alleged abuse of office and money laundering with regard to the granting of the Oil Prospecting License (OPL) 245 to Shell and ENI filed against him and four others by the EFCC on behalf of the Federal Government.

Recalled that Former President Olusegun Obasanjo administration revoked the OPL 245 that was granted his Petroleum Minister, Mr Dan Etete by the late Head of State General Sani Abacha and reassigned it to Shell Nigeria Exploration and Production Company.

Malabu Oil and Gas was, however, said to have reclaimed the oil block in 2006 via the court while Shell rejected and challenged the decision in court.

However, the EFCC alleged that fraudulent settlement and resolution had ensued and that it allowed Shell and Eni to buy the oil block from Malabu in the sum of $1.1billion.

EFCC stated that investigation into the matter has revealed that crimes which have to do with conspiracy, forgery of bank documents, bribery, corruption and money laundering to the tune of over $1.2 billion was committed.

Be the first to comment on "INTERPOL Hands Fmr. Attorney Gen. Adoke, Over To EFCC"