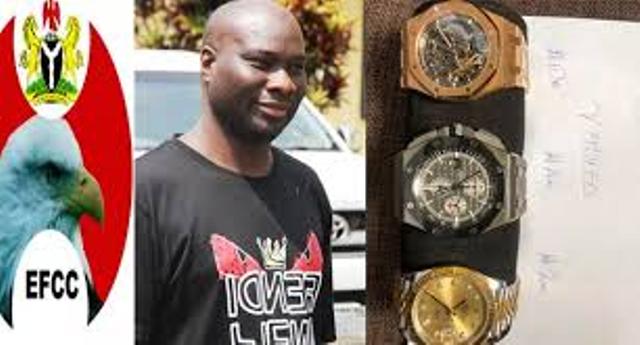 A Federal High Court sitting in Lagos, today, granted bail to an Internet Celebrity, Ismail Mustapha, popularly called Morpha, who was arraigned before the court for allegedly laundered the sum of N18 billion.

Mustapha was granted bail in the sum of N100 million with one surety.

Justice Liman also ordered Morpha to deposit his international travel passport with the Court’s DCR and always visit the EFCC every 14 days, in order to ensure that he did not travel out of the country till the determination of the charge against him.

It would be recalled that the defendant and his company, Ismalob Global Investment Limited, was last Monday arraigned before the court by the EFCC on a 14-count-charge bordering on operating BDC without registration with Central Bank of Nigeria, CBN, and other regulating Ministries, failure to comply with the Federal Ministry of Industry, Trade and Investment in carrying out and unlawful negotiation of foreign exchanged.

The offences according to the EFCC contravened sections 18(c) and 15(2)(d) of the Money Laundering Prohibition Act,2011 as amended and punishable under section 15 (3) of the same Act.

He had pleaded not guilty to all the counts.

Prior to the ruling on the bail application, the EFCC had called three witnesses, who includes; Nnenna Ezekannegha, Senior Manager Customers Services, Trade and Exchange Department of Central Bank of Nigeria (CBN), a banker, Peter Ademola Adegoke and Okafor Ikenna Ignatius.

In her evidence, the CBN official, Mrs. Ezekannagha, told the court that the CBN has no record of licensing Ismalob Global Investment Limited as a Bureau de Change operator.

She said for the CBN to licence a firm as a BDC operator, such firm must show evidence of incorporation as a limited liability company by the Corporate Affairs Commission.

She explained that all licensed BDCs have a transaction limit of $5,000.

When the defence counsel, Oyewole (SAN) asked her whether it was unlawful for an individual who has foreign currency in his domiciliary account to give foreign currency to a friend in exchange for naira, the CBN official said it would not be unlawful if it was not a commercial transaction.

She said it becomes a commercial transaction if it involves making profit and it would be illegal.

Also testified in the case, Adegoke, a Compliance Oficer with a new generation bank, told Justice Liman that Ismalob Global Investment Limited has a bank account domiciled in his bank, which Mompha was the sole signatory to the naira account.

Reading from the firm’s statement of account, Adegoke, who was led in evidence by the EFCC lawyer, Mr Rotimi Oyedepo, told the court that between 2015 and October 2019, there was a total inflow of N18.5billion into the account, while a total of about N18billion  moved out within the same period.

Under cross-examination by Morpha’s counsel, Oyewole (SAN), Adegoke affirmed that his bank would not involve itself in anything unlawful.

Asked whether the bank at anytime reported transactions in the firm’s account as being suspicious, Adegoke said, “Yes, we reported to the NFIU (Nigeria Financial Intelligence Unit).”

Asked what the NFIU’s response was, the witness said, “They (NFIU) don’t need to respond to us.”

Asked if there was any sanction following the report to the NFIU, Adegoke said he would not know.

When Oyewole (SAN) insisted that as a Compliance Officer, who is responsible for the freezing of bank accounts at the requests of anti-graft agency, he should know if there was a sanction, Adegoke explained that the Bank has a desk that handles reports to the NFIU and “I can’t say I know about all sanctions”.

Also, a Benin City-based BDC operator, Ikenna Okafor, who testified as the third prosecution witness, told the court that he did business with Ismalob Global Investment Limited through “one of its directors, Alhaji Ahmadu Mohammed.”

Okafor said Mohammed used to come to his base in Benin, Edo State, to buy Euro in the name of Ismalob Global Investment Limited.

“After negotiation with Ismalob Global Investment Limited through Alhaji Mohammed, he usually makes payment into my account through Ismalob,” Okafor said.

Under cross-examination by Oyewole, Okafor said he met Mompha for the first time three days ago at the EFCC office in Ikoyi.

The BDC operator said he was himself detained for seven days by the EFCC before being released on an administrative bail during the week.

Another count reads; “that you, lsmaila Mustapha and Ismalob Global investments Limited within the jurisdiction of this Honourable Court, sometimes being a Designated Non-Financial institution (“DNFI”) failed to comply with the requirements of submitting to the Federal Ministry of Industry, Trade and Investment a declaration of your activities as specified under section 5(1)1a) of the Money Laundering (Prohibition) Act, 2011 (as amended) and you thereby committed an offence punishable under section 16(1) (b) of the same Act”.

Be the first to comment on "Money Laundering: Internet Celebrity, Morpha Gets N100M Bail"