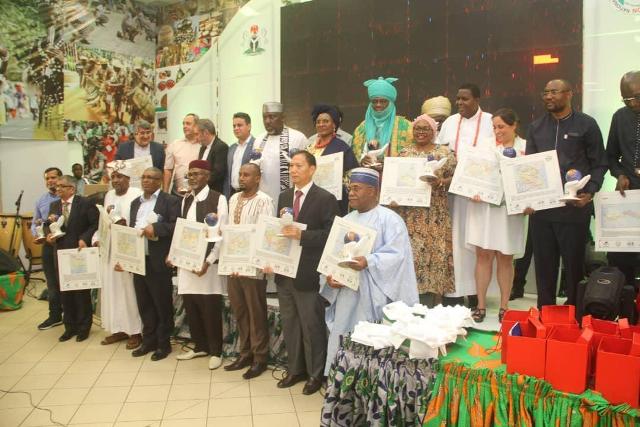 As the 12th edition of the International Arts and Craft Expo comes to a resounding  and glorious end, Ambassadors from several countries have agreed INAC is the way to go.

The envoys admitted they were highly impressed with the just concluded INAC held in Abuja from 20th to 24th, just as all participants were honoured with special awards and certificates during the closing ceremony reaffirming the role of culture in global peace and unity.

The envoys also agreed that November 24th as chosen by the Director-General, National Council for Arts and Culture, Otunba Segun Runsewe to celebrate global cultural diplomacy day for peace was a masterstroke as far as culture and global unity is concerned.

Making his remarks during the closing ceremony, the Chairman of the occasion, Senator Rochas Okorocha said no nation can grow beyond their culture and traditions.

He commended Runsewe for a hugely successful outing asserting that, “When people say Nigeria is the giant of Africa, they are referring to our culture, very soon the world shall hear from us because the senate is giving serious thoughts to culture.”

“Otunba you are doing well and the Senate will support you.” Rochas concluded.

Responding, Otunba Runsewe praised the countries and states that took part, saying that they are part of the historic story of INAC.

In separate sessions during the 4-day expo with the theme, “Networking Nigerian Arts To The World”, Envoys from Sudan, Venezuela, Bangladesh, Ethiopia, Malaysia and many more collectively agreed that Nigeria got it right with INAC.

Libyan Ambassador to Nigeria, Mr. Saleh Saeed, advocated for the participation of more countries in subsequent editions, “the expo has been ongoing for some years but the embassy in Nigeria decided to participate in this year’s event. It is important for countries to showcase their cultural heritage and the expo is a good platform for this.” He noted.

Trade and Tourism Officer, Ethiopian Embassy, Abuja, Ms Harmella Mathewos, appealed to Nigerians and other countries to continually network in order to leverage on each other’s unique cultural products.

Speaking excitedly during the Expo, Venezuelan Ambassador to Nigeria, David Carraballo commended the National Council for Arts and Culture for organising INAC saying, “the theme of the event creates an opportunity for countries to connect, integrate, share cultural values and experiences which would further foster global unity.”

On his part, H.E. Mr. Md Shameem Ahsan, High Commissioner of Bangladesh to Nigeria said his country is proud to synergise with Nigeria in cultural exchanges using the platform of INAC assuring that they will continue to participate just like they have in previous outings.

Be the first to comment on "INAC 2019: Ambassaors Throw Weight Behind Expo, Lauds Runsewe For Successful Event"