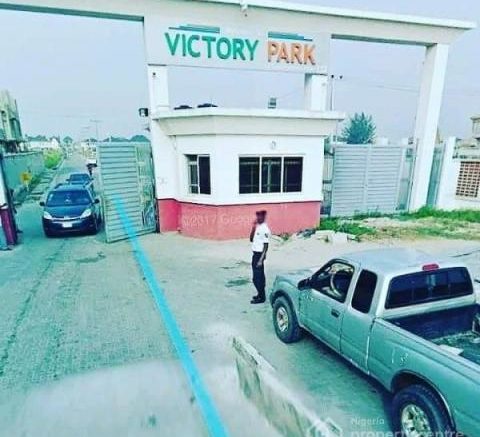 As controversy continued  to rage over the takeover of Victory Park Estate, Lekki , Lagos by the Asset Management Corporation of Nigeria, (AMCON), as a result of the   indebtedness of N12,966, 510, 191.10,  the law firm representing AMCON,  Matrix -Solicitors  LLP has come out to clear the air on the  misgivings over the takeover in some section of the media,  the role played by the Receiver Manager,  Mr Lanre Olaoluwa,  and the circumstances  leading to the takeover of the estate.

Giving insight into the matter at a press conference in Lagos today , Mr Jide Olajite, one of the senior lawyer in Matrix Solicitors LLP, decried the falsehood being circulated around the media, that the take over was in disobedience to an order for injunction granted by a Lagos High Court.

Olajite said the Receiver Manager , Mr Lanre Olaoluwa had since concluded his assignment on the take over of the Victory Park Estate consequent upon an interim order of the Federal High Court, Abeokuta granted on the  16th of June, 2017 and the handing over of same to AMCON on the 25th of June 2019 consequent upon a Judgement of the Federal High Court.

The legal practitioner said with the handing over of the properties to AMCON as directed by the court, the Receiver/Manager has nothing to do again with whatever happened in the estate except interfacing between AMCON and the residents.

He added that on the day of executing the court judgement as to the take over,  the occupier of Block B plot 1 was present and aware that possession was taken by AMCON  and  that this was long before he approached the Lagos State High Court to obtain an order of injunction on 24th of October 2019 on an asset which AMCON has being in possession since 25th June 2019.

He said the takeover of the assets was   to offset the indebtedness for which the properties were used as collaterals to secure a credit facilities from a consultium of banks, Sterling Bank Plc, Skye Bank Plc, Wema Bank PLC and Unity Bank he said

The lawyer added that even at that , AMCON immediately appealed against the order of injunction obtained at the Lagos State High Court and also applied to the Court of Appeal for an order suspending the injunction in view of the provision of the AMCON ( Amendment No 2) Act 2019  which provides that such order orders should not be granted.

Olajite while giving background facts to what led to AMCON’s take over of Victory Park Estate, said AMCON acquired a debt which arose from the acquisition and development of land owned by Knight Rook Limited and also known as Victory Park Estate from a consultium of four banks, Wema, Unity Sterling and Skye Bank.

He added that as collaterals for the debt, the banks transfered to AMCON , 100 percent  shares of Knight Rook Limited and designated 14 hectares of land within the estate.

The legal practitioner said that in order to recover the debt , by the Seed of Appointment dated 27th June 2016 which was executed by AMCON and dully registered at the Corporate Affairs Commission, CAC,  an order of the court of 16th  August 2016 made in suit number FHC/AB/CS/69/16 between AMCON versus Havilla VIllas Limited and Others , Mr Lanre Olaoluwa,was appointed Receiver /Manager over Knight Rook Limited, Grant Properties Limited and Fibigboye Estate Limited and that he took possession of the assets of Knight Rook Limited including the designated 14 hectares in Victory Park Estate on 16th June 2017.

Olajite said upon his appointment , the Receiver/ Manager , Lanre Olaoluwa made publications in the Guardian and Thisday newspapers of 16th June 2017 informing the general public of his appointment.

He added that on 3rd of October 2017, Justice Ibrahim Buba of the  Federal High Court entered judgement in favour of AMCON in suit number FHC/L/ CS/ 744/2017 between AMCON versus Knight Rook Limited and Others, for the sum of N12, 966, 510, 191.10 and the foreclosure of the equity right of redemption and such other right in the properties of Knight Rook Limited to AMCON  on 16th October 2017 in satisfaction of the judgment. From that date, the Receiver/ Manager ceased to be in possession , or control of Victory Park Estate and properties affected by the judgement, he said.

Olajite added that AMCON as a responsible government agency is carrying out its job with human faces  as it was aware that some of the residents have issues which must be genuinely addressed and that AMCON has been interfacing with the residents to find an amicable resolution to thier concerns. He however, insisted that the agency is aware of its responsibility that it has debts to retrieve from debtors which should be done with human face, adding that majority of the residents are amenable to AMCON’ overture while some are not.

Be the first to comment on "Victory Park Estate Take Over: AMCON Lawyer,   Receiver /Manager Clears Air On Controversy"