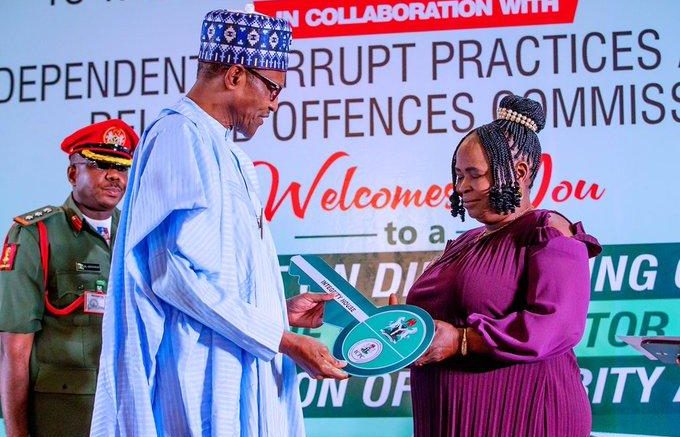 The Independent Corrupt Practices and Other Related Offences Commission (ICPC) today, honoured  a staff of the Federal Airports Authority of Nigeria(FAAN) Mrs. Josephine Ugwu for her honesty and integrity in the discharge of her duties.

A statement issued by the General Manger, Corporate Affairs, FAAN, Mrs Henrietta Yakubu informed that Ugwu was presented with the award at a two day summit on ‘Diminishing Corruption in the Public Sector’ jointly organised by the Office of the Secretary to the Government of the Federation and ICPC in Abuja.

Recalled that in a celebrated case in 2015, Ugwu while carrying out her duties as a cleaner at the Murtala Muhammed Airport (MMA), Lagos saw the sum of $12,200,000 in a toilet and submitted it to security officials.

The money, according to Yakubu was subsequently returned to the owner, adding that she has also refunded other sums of money lost by several passengers at different times.

Yakubu stated that Ugwu was subsequently given automatic employment by the authority in recognition of her honesty and exemplary conducts.

The event, the FAAN image maker, said climaxed with Ugwu having a hand shake with President of the Federal Republic of Nigeria, President Muhammadu Buhari and she was also given a brand new apartment in Lagos for her act

Be the first to comment on "ICPC Honours FAAN Staff With Integrity, Honesty Award"