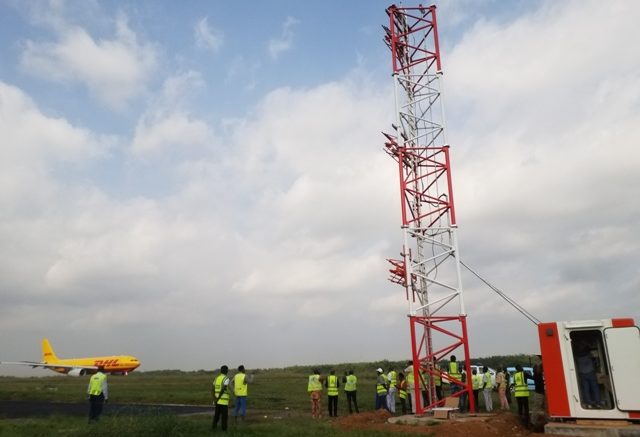 … To Be Available In Lagos, Abuja Airports Third Week Of December

According to NAMA, the exercise which started today showed that the equipment is fully operational on test basis, even as all the ILS components; Localizer, Glide Slope and Distance Measuring Equipment are propagating signals optimally.

Speaking at the commencement of the test run, Managing Director of NAMA, Capt. Fola Akinkuotu, stated that the alignment of the facility had already been done by the engineers.

This, according to him was to ensure that the equipment aligned with the centre line of the runway and also that it is aligned with the descent path that will be comfortable to arrive the threshold at a good landing height to make a normal landing.

“In a couple of weeks, we will bring a calibration aircraft to fly in and certify that the equipment is good to go,’’  he said.

He said according to the timelines, CAT III ILS would be available at both Lagos and Abuja airports by the third week of December 2019.

Explaining the rationale for deploying the facility, Akinkuotu said the agency was responding to the demands and clamour by airlines for better navigational facilities in Nigeria.

According to him, “The CAT II ILSs we have right now are 800 meters visibility. With the CAT III system you will be able to come down lower and when you are closer to the runway you will be able to see it better. A CAT III operation is a precision approach at lower than CAT II minima.  A category III A approach is a precision instrument approach and landing with no decision height or a decision height lower than 100ft (30m) and a runway visual range not less than 700ft (200m).”

“The deployment of CAT III ILS will reduce the landing and takeoff minimas. The landing minimas are based on the fact that you are coming from somewhere and you are able to land while the takeoff minimas are predicated on certain aspects, among which is your ability to take off and if need be, you are able to land back to where you took off. Because we have better equipment, it will lower both minimas, so we expect to see an improvement in flight operations in the country in the coming weeks and months,” he added.