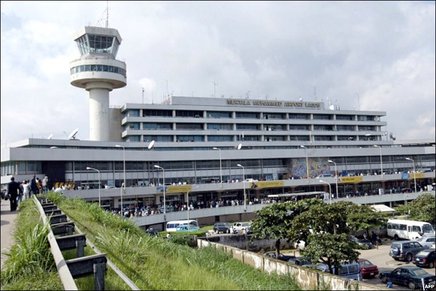 A tanker loaded with Petroleum Motor Spirit(PMS)also known as petrol today fell opposite the Domestic Police Station, Murtala Muhammed Airport(MMA),Lagos, thereby creating terrible traffic for  motorists, air  travelers and cars plying the Lagos Abeokuta road and the roads leading in out of the airport.

When Abelnews visited the scene of the accident, a source close to Forte Oil, who spoke on the condition of anonymity, alleged that the tanker was coming to deliver petrol to the Forte Oil filling station close to the Police Station, when its break failed and in the process tumbled just in front  of Local or Garage bus /stop.

The source added that he also had to run to as far as Arik Air headquarters before stopping to know what was going to happen to the tanker.

He added that what surprised him was how the two mechanics that were working on a car right in front of the bus/stop shelter and the car were not hit by the fuel tanker.

Speaking further, the source pointing to his legs, stated that he did remember to put on his sandals when the accident happened, as he had to run for his dear life first.

As at the time Abelnews visited the scene of the accident, there were three fire tenders at the scene , two blocking the roads leading to Ikeja from the airport, one of which is from Lagos state , and one from forte Oil while the only one discharging the foam and Chemical on the accident tanker is from FAAN.

As at the time of compiling this report , fuel was still gushing out from the tanker ,while the Fire tender from FAAN continuously pour chemical on the tanker.

Meanwhile, another fuel tanker with registration number AGL319XV was seen trying to evacuate the remaining product in the accident tanker.

Also, water was supplied from one of the aviation fuel farms close to the Nigerian Civil Aviation Authority (NCAA).

At the moment air travelers, who have flights to catch to avoid missing their flights had to take commercial motorcycles also known as Okada, or O Pay, while those who could not pay the exorbitant charges had to resign to fate.

Attempt to reach the General Manager, Public Affairs, FAAN, Mrs Henrietta Yakubu on the matter failed as she did not pick her calls;.

Be the first to comment on "Air Travellers, Commuters, Motorists Groan, As Fuel Tanker Falls At Lagos Airport, Spills Product"