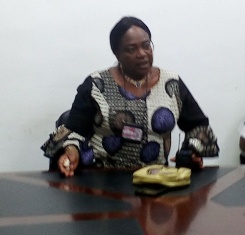 The Airport Manager, Murtala Muhammed International Airport (MMIA, Lagos, Mrs Victoria Shin-Aba has stated that the Federal Airports Authority of Nigeria (FAAN) has put measures in place to ensure safety and security at both land and airsides of the airport.

This is just as the Airport Manger (AM) also stated that the major challenge of the airport was coming from the airside and that FAAN in conjunction with other security agencies at the airport are tackling the issues.

The enhanced security measure may not be on unconnected with the recent incident involving Royal Air Maroc B737-700 aircraft with registration number CN-RNQ that was forced to return to Apron of the international wing of the Murtala Muhammed Airport (MMA), Lagos.

Shin-Aba said this today during a chat with a select aviation journalists in her office at the international wing of the Murtala Muhammed Airport(MMA),Lagos.

FAAN, in conjunction with the Nigerian Air Force and the Police frequently patrol the airside to ensure that the airside is safe for aircraft to land and take off, adding that the onus of ensuring that air and land sides are safe and secured lies with FAAN.

She stated that as a result, FAAN would always ensure that bushes are cleared regularly so as not to give opportunity for unwanted persons to come into the airside.

She said that the agency has put in place patrol teams to follow aircraft when they land and taxing and also when they are taxing to take off, as part of measures to ensure that aircraft are not tampered with .

The AM added that the agency has also positioned a patrol team made up of Police and Air Force personnel at Alpha Three, where there is possibility of aircraft holding.

She pointed out that the agency has also put in place another security team that escorts aircraft to park at the apron, adding that the team follows aircraft at reasonable distance until they park.

On the Close Circuit Television (CCTV), Shin- Aba said that the agency has a little challenge, especially when it is dark and that during that period the visuals may not be clear enough.

She however stated that the CCTVs at the airport adequately cover airport terminal and other areas apart from the airside.

In her words, ”The only place we have issues is the airside, other places are covered.”

In the interim, the AM, stated that FAAN had introduced vehicles with Dash Cameras, adding that more of these vehicles would be imported and that in the long run the Thermal and Infrared Cameras would be provided in the next few weeks and that she said is another layer of security.

The Air Force, she said are equally helping to provide security at the airside and that there are also guards manning the bushes to prevent any kind of threat to airplanes at airside security.

According to her, “We are trying to reduce access control. We have done a good job but because our airport is in the city everybody wants to visit the airport. We are mostly concerned about the airside to ensure aircraft are safe.”

On the encroachment on airport land, the Airport Manager stated that the management of the agency was already working with the Lagos State government on the issue, adding that very soon something would be done to it.

Meanwhile, as the Royal Air Maroc B737-700 aircraft with registration number CN-RNQ incident continues to generate discuss, an Aircraft Engineer, who spoke to Abelnews on the condition of anonymity has clarified the situasion.

He said that aircraft door cargo door can be opened from outside by pulling the door handle out of the recess and rotating it counter clockwise , adding that rotation of the handle activates a torque tube to withdraw the latch rollers from the latch fitting.

The Aircraft Engineer, who said he was trained on some of Boeing airplanes such as DC10, F27, F28 , said that as the door swing onboard under tension of the door balance mechanism, the warning proximity switch is activated to energise appropriate door warning in the control cabin to alert the crew. Speaking further, he posited that the forward Cargo is close to the second engine which is called ‘Danger Zone, stressing that when the engine is operating, the Forward Cargo becomes Dangerous Zone and that anyone within the zone could be sucked into the engine.

He stated that the opening and closing of the cargo door however takes more than three minutes.

He stated that it was dangerous practice to go and open because of the engine blast.

“The proximity switch and the plunger could vibrate when Engine Lever is moved above idle running ,for some seconds, the light may flash and warning light will remain off .It is never an easy thing to open the cargo doors while the engine is running,” the Engineer said.