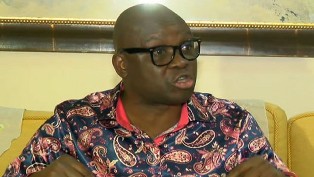 Justice Chukwujekwu Aneke of the  Federal High Court, Lagos was ON Wednesday   informed by a top official of  Zenith Bank, Plc, Dr Abiodun Oshode  that the bank  took a bullion van to the Akure Airport in Ondo State to evacuate N1.219billion cash from an aircraft in 2014.

Ondo, Ekiti and Kwara States made the revelation while being led in evidence by counsel to the Economic and Financial Crimes Commission, EFCC, Mr Rotimi Jacobs (SAN).

Dr Abiodun Oshode explained that the bank took the decision to render the service based on the request of the former governor of Ekiti State Ayodele Fayose’s aide, Abiodun Agbele.

It would be recalled that Ayodele Fayose is facing trial over allegation of money laundering to the tune of N6.9bn filed against him by the EFCC, upon which he was re-arraigned before Justice Chukwujekwu Aneke, on July 2, 2019.

Ayodele Fayose was re-arraigned before justice Chukwujekwu Aneke alongside his  firm, Spotless Investment Ltd, on an 11 counts of fraud and money laundering.

Prior to his re-arraignment before Justice  Aneke, Fayose had been arraigned before Justice Mojisola Olatotegun also of the Federal High Court, Lagos on October 22, 2018.

Fayose had pleaded not guilty and was granted bail in the sum of N50 million on October 24, 2018 with two sureties in like sum.

At Wednesday’s proceedings,  Dr Abiodun Oshode told  Justice Aneke that a former Minister of State for Defence, Musiliu Obanikoro, was present during the operation at the airport “but we did not interact.”

Oshode revealed that on taking the N1.219billion cash to the bank, Abiodun Agbele made available three bank accounts into which the money was to be lodged.

The witness listed the three accounts as those of Privateer Nigeria Limited; Spotless Investment Limited and “a personal account of His Excellency (Fayose).”

Oshode equally listed “Ayodele Fayose and Mrs. Olayemi Fayose” as the signatories to the account of Spotless Investment Limited.

During cross examination by Mr  Olalekan Ojo,  SAN, as to whether on “seeing such volume of money being paid into your bank,” the bank reported the N1.219bn lodgment to the authorities as “illicit or suspicious,” Dr Oshode  responded that, “It was reported.”

Oshode also told Justice  Aneke that it was the standard practice that banks must report cash transactions above N1m for an individual and N5m for a corporate body.

He also said he did not get any instructions to stop the transaction after same was reported.

Dr Abiodun Oshode agreed with Olalekan Ojo (SAN) that, “the transaction was not stopped because it was deemed appropriate.”

The witness said that Ayodele Fayose invited the bank because he too believed that the transaction was appropriate.?

He further stated that at no time did Ayodele Fayose fill any teller at any branch of the bank, either in Ekiti or Akure.

The matter has been adjourned until Wednesday, October 23, 2019 for further proceedings.

The EFCC in the charge had stated that on June 17, 2014, Fayose and one Abiodun Agbele took possession of a sum to the tune of N1.2 billion for purposes of funding his gubernatorial election campaign in Ekiti, which sum they reasonably ought to have known formed part of crime proceeds.

Fayose was also alleged to have received a cash payment of the sum of five million dollars, (about N1.8 billion) from the then Minister of State for Defence, Sen. Musiliu Obanikoro, without going through any financial institution.

Former Governor Ayodele Fayose was equally alleged to have retained the sum of N300 million in his account and took control of the aggregate sums of about N622 million which sum he reasonably ought to have known formed part of crime proceeds.

Ayodele Fayose was alleged to have procured De Privateer Limited and Still Earth Limited, to retain the aggregate sums of N851 million which they reasonably ought to have known formed part of crime proceeds.

Besides, the defendant was alleged to have used the aggregate sums of about N1.6 billion to acquire properties in Lagos and Abuja, which sums he reasonably ought to have known formed part of crime proceeds.

He was also alleged to have used the sum of N200 million, to acquire a property in Abuja, in the name of his elder sister Moji Oladeji, which sum he ought to know also forms crime proceeds.

Be the first to comment on "Alleged N6.9B Money Laundering: Part Of N1.219B Deposited In Fayose’s Personal Account–EFCC Witness"