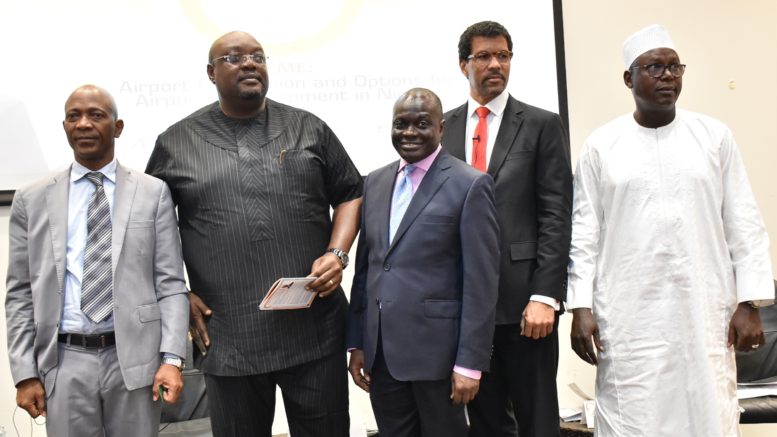 …As NTM Calls On Govt. To Embrace PPP, Concession

As the debate on whether to concession Nigerian airports or going into Public Private Partnership (PPP) continues to generate controversy, the Chairman House Representatives Committee on Aviation, Nnaji Nnolim has stated that he would positively give his total legislative support to any model of airport management that would make Nigerian airports more efficient, competitive and attractive to the passengers, airlines.

He said this today at the 2019 Colloquium with the theme, ”Airport Concession and Airport Development in Nigeria” organised by Nigerian Travel Mart at Eko Hotel and Suite ,Victoria Island Lagos.

Presenting a paper titled “Our Airports Are Underdeveloped and Under-Utilised”, Nnaji argued that the issue of whether to privatise government owned airports is a sensitive matter that requires empirical data and calculation, which according to him would enable stakeholders to arrive at a point of final conclusion.

He stated that as a member of the legislature, he would use the data to equip himself to decide on what direction to pursue, adding that the matter has gone far beyond breakfast discussion.

The Chairman said that for Nigeria to achieve better result and have a 21st century airport system in Nigeria, the question is not only whether to privatise or not, but to seek the right direction for improvement and speedy progress.
He contended that results emanating from the corridors of air transport research shows that, airport expansion and growth is in favor of private equity injection and management of airports are said to be more efficient under the private sector, adding that in the last 10 years have seen these results in favor of privatization but there are doubts also about the continuing of this trend into the near future. He said that since 1980 when the push for airports’ privatisation began, it has continued to steer great arguments in favour or against it, adding that while the International Air Transport Association (IATA), the umbrella body for global airlines, strongly kicked against privatisation of airports, Airport Council International (ACI) believes it is the best way to go.

Nnolim, however, stated that recent report by ACI, the trade name for global airports, indicated only 14 per cent of airports world-wide have some level of privatisation, from corporation-led management to varying types of public-private partnership agreement.

The Honorable quoted ACI as saying that the percentage has increased dramatically since the 90s and primarily comprises larger aviation hubs that account for around 40 per cent of global traffic.

Airports, he said are under increasing pressure to expand infrastructures and services to meet this unprecedented demand, but that a rise in operating costs and national budget cuts, have made this increasingly unattainable for the public sector.

Cash-strapped governments, the House Committee on Aviation, Chairman stated could privatise airports to increase investment without impacting on their national coffers.

To buttress his point, Nnaji posited that available statistics indicates that more than 50 per cent of European airports have some form of private ownership, with this percentage increasing significantly since 2011.

Earlier , the organiser of Nigerian Travel Mart(NTM), Mr Simon Tumba called on government to explore a Public Private Partnership (PPP) and Concession options of developing Nigerian airports carrying along the workforce at FAAN.

This is just as he said that  the N14 Billion approved by the Federal government to renovate the Murtala Muhammed International Airport(MMA), Lagos, which is nearly $40 million is not enough for emerging market such as Nigeria.

According to him, “”Taking cognizance to the dwindling revenue of the government, very demanding social needs and the increase of our debt profile as a nation, one may say the government is doing its best. However $40 million is not enough for an emerging market like Nigeria, a country with every potential to be a global hub. The government needs to think out of the box!,”

He stated that for decades Nigerians have seen the state of airports, especially the major gateways in Lagos, Abuja, Enugu, Port Harcourt, Kaduna and Kano and that over the last few years the Federal government has made investments to enhance the customer experience in these airports but that the “Truth be told; we are lagging behind, despite the efforts of the Federal Airports of Authority /FAAN).”

“Our humble opinion in NTM is that the government should explore a Public Private Partnership (PPP) and Concession our airports carrying along the workforce at FAAN. With Nigeria’s God given natural and Human Resources, and a solid leapfrogging plan and strategy, we should be aiming for a futuristic airport of $2-5billion. We have the population, the market and geographic position to make and realize such aspirations.

Be the first to comment on "House Of Reps. Will Support Efficient, Competitive, Attractive Airport Mgt. Model– Nnaji"