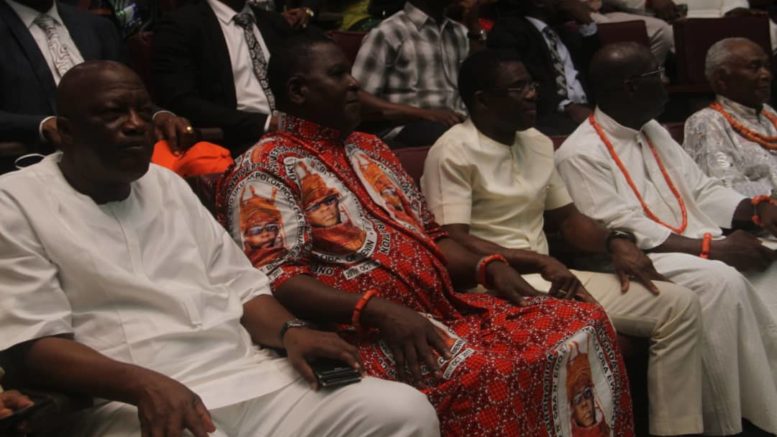 The ongoing 2019 edition of the National Festival of Arts and Culture(NAFEST) in Benin will be remembered as a royal NAFEST of sorts given the royal complexion to almost every aspect of the festival. From a royal demonstration of Nigerian cuisines by several states to a display of indigenous fabrics in royal apparel to a night of glorious royal grandeur personified by the Benin Monarch himself, HRM Oba Ewuare II, all showcasing royalty in its purest form. The renowned and highly revered Oba attended a variety show with his beautiful wives, which is rare as far as Benin tradition is concerned.

Also in attendance at the show was the full complement of the Edo State Government led by the Governor, Mr. Godwin Obaseki alongside the Director-General, National Council for Arts and Culture, Otunba Segun Runsewe, who led over 25 state contingents to the event as they collectively paid homage to the revered Oba. * The Benin Monarch HRM Oba Ewuare Il and his beautiful wives during the variety show marking part of his coronation anniversary.

The main feature of the night was a dramatic presentation of the legendary Queen Mother, Idia, whose brave exploits in saving the old kingdom are well emblazoned in Benin folklore.

Earlier in the day, Nigerians in attendance were treated to a full dose of royal culinary delight by several tribes drawn from states like Ekiti, Delta, Adamawa, Enugu, Imo, Kaduna and many others in a healthy Food Fair Competition staged to ascertain the tribe that can rival Benin royalty. Nigerians can expect a complete treat of culture and royalty never before experienced in NAFEST.