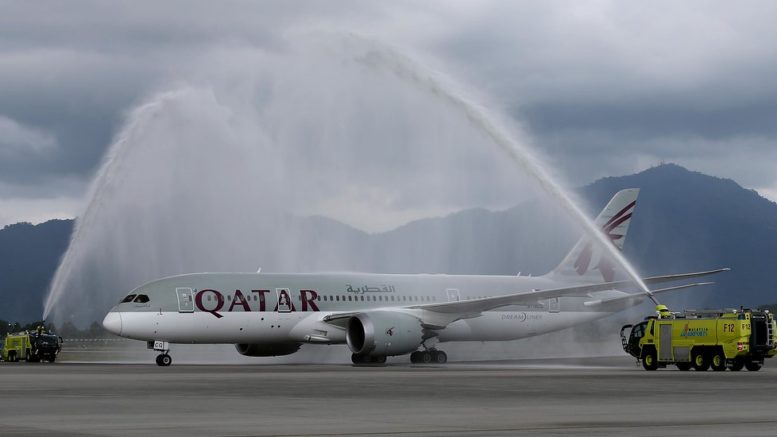 Qatar Airways has operated its first flight from Doha to Langkawi, Malaysia and it landed at Langkawi International Airport on Tuesday, October 15, 2019.

To celebrate the launch of the popular new destination, an extra special flight was operated from Doha to Langkawi on Wednesday, October 16, 2019, in which a number of VIPs, international media and Qatar Airways Group Chief Executive, His Excellency Mr. Akbar Al Baker were on board. Speaking, Qatar Airways Group Chief Executive, His Excellency Mr. Akbar Al Baker said, “I am thrilled to have been on today’s special flight to Langkawi and to be here celebrating our arrival to this stunning archipelago. Langkawi marks the eighth new destination added to Qatar Airways’ rapidly expanding network in 2019. With its forested hills, stunning white-sand beaches and glimmering turquoise waters, Langkawi is fast becoming one of South East Asia’s most highly sought-after destinations and the reason why we knew we had to launch our flights here. Beginning with a four-times-weekly service that will grow to five-times-weekly from 27 October 2019, we look forward to welcoming business and leisure travellers alike on board so that they may experience the ‘Jewel of Kedah’.” Also speaking, the Chief Operating Officer of Malaysia Airports, Dato’ Mohd Shukrie Mohd Salleh said, “I would like to welcome Qatar Airways to Langkawi International Airport, the first middle eastern airline to fly to this beautiful island. The inclusion of a new international airline to Langkawi will definitely spur our Visit Malaysia 2020 campaign by increasing the number of tourists into Langkawi.”

According to the airline the new service to Langkawi will be operated by the airline’s state-of-the-art Boeing 787 Dreamliner aircraft, featuring 22 seats in Business class and 232 seats in Economy class, with spacious cabins and specially-designed interiors.

Apart from enjoying the award-winning in-flight service on board, passengers travelling to Langkawi will also have access to Oryx One, Qatar Airways’ in-flight entertainment system, offering the latest blockbuster movies, TV box sets, music, games and much more. The national carrier of the State of Qatar has launched a host of exciting new destinations in 2019, including Lisbon, Portugal, Malta; Rabat, Morocco; Davao, Philippines; Izmir, Turkey; and Mogadishu, Somalia and will add Gaborone, Botswana to its extensive network in December 2019 with Luanda, Angola and Osaka, Japan, following in 2020.

A multiple award-winning airline, Qatar Airways was named ‘Airline of the Year’ for the fifth time by the 2019 World Airline Awards, managed by international air transport rating organisation Skytrax.

Be the first to comment on "Qatar Airways Begins Flight Operations To Langkawi, Malaysia"