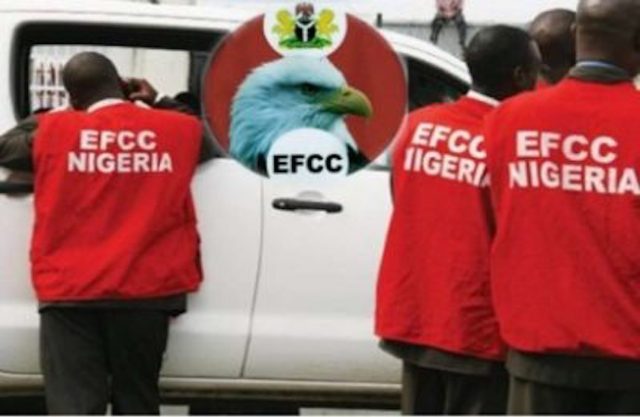 A vessel, MV Neso11, 25 men and a woman were today arraigned before a Federal High Court, Lagos, for unlawful dealing in petroleum products.

Others include: Iwuoha Okechukwu Victor, Ogerugbe Patrick (aka Odafe), Emmanuel Eze, Victor Uchendu and Paul Obi. While the only woman among them is Inyang Ruyie Grace.

The EFCC counsel, M. K. Bashir, told the court that all defendants were arrested within the Nigerian maritime domain and the gulf of Guinea, conspired among themselves and unlawfully dealt petroleum products.

The defendants pleaded not guilty to the charge when it was read to them.

Following their not guilty plea, the prosecutor, asked the court for a trial date, while also urged the court to remand them in prison custody, till the determination of the charge against them.

Bashir told the court that the offences committed by all the defendants are contrary to Section 17(a) and (b) of the miscellaneous offences Cap. M17, laws of the Federation of Nigeria, (revised edition) 2004 and punishable under the same Act

However, the defendants’ counsel who includes; A. A. Adetunji, C. J. Okoro, Kennedy Osunwa, Nelson Otaji, Dauphin Precious, Hussain Afolabi who also stood in for Tolulope Ige, told the court that their clients have been in custody of the Nigerian government for over a year.

The counsel while informing the court that they have filed their clients’ bail application and same served on the prosecution, therefore urged the court to admit their clients to bail in the most liberal terms.

Though, the prosecutor told the court that he intend responding to the application, but the presiding judge haven conceded to the defendants’ counsel request, admitted each of the defendants to bail in the sum of N2 million with one surety each.

The judge also ordered that the surety must be a landed property owner within the court’s jurisdiction and the verification of the bail terms must be done by the court’s registrar.

The judge while adjourning the matter till December 9, 11 and 13, for trial, warned the defendants not to miss the trial dates.

The judge also ordered that all the defendants be remanded in prison custody except Iwuoha Okechukwu Victor, who is to be remanded in the EFCC custody, because of state of health, till the perfection of the bail term.

Be the first to comment on "EFCC Arraigns Vessel, 25 Men, 1 Woman For Oil Bunkering"