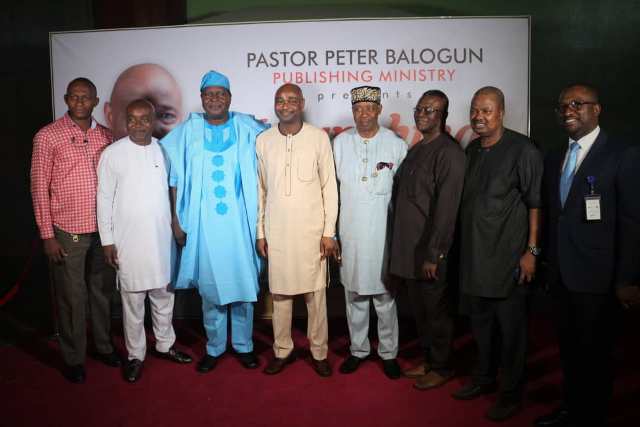 * DG, NCAC, Otunba Segun Runsewe (3rd from left), Pastor Peter Balogun of Citizens Church(4th from left) and members of the Eagles Fellowship during the launch of 4 books written by Pastor Balogun at the International Conference Centre in Abuja on Sunday

Christians have been enjoined to uphold the tenets of Christianity as enshrined in the Holy Bible and other Christian literature in order to build a more prosperous nation.

Both men gave the counsel in Abuja on Sunday during the launch of four books written by Pastor Peter Balogun all reflecting several themes aimed at enhancing the spiritual life of Christians.

The chairman of the book launch and Director-General, National Council for Arts and Culture, Otunba Segun Runsewe set the ball rolling in his opening remarks by commending the author for propagating the message of a sound Christian culture through book writing.

Runsewe encouraged everyone in attendance and indeed all Christians to get copies of the books, read and absorb the life-changing messages contained therein.

Besides the 18 books already published by Pastor Balogun who is the Senior Pastor of Citizens Church in Abuja, the four titles launched on Sunday include:

Reviewing the book, “The Obed Edom Testimony,” Bar Kehinde Ogunwumiju gave a deep insight into the scriptural themes embedded in the book which according to him if imbibed, will help us live worthy Christian lives.

He praised the author’s drive and divine inspiration in putting together the text saying the effort will impart positively on the Christian culture in Nigeria.

The reviewer of 2 books, “Destroying Ancient Altars” and “The Mighty God,” Pastor Dayo Olutayo was apt in capturing the essence of both books in the life of Christians as reflected in the holy Bible admitting that the writer asked him to review two out of the four books launched due to the love they share in the body of Christ.

The fourth book, “Understanding Kingdom Secrets”, was reviewed by Mrs. Tosin Dokpesi and she listed the chapters and their titles relating them to the author’s attempt to demystify the deep secrets which a Christian must embrace in order to make heaven.

The media veteran explained the clarity of purpose which the author demonstrates in his choice of action words and scriptural references throughout the book, commending Pastor Balogun for the noble effort.

After a successful launch, Pastor Balogun delivered his vote of thanks, expressing his heartfelt gratitude to everyone especially Otunba Runsewe, who came to support him while also praying for God’s blessings on them.

He specially recognised and appreciated his wife and children for their love and understanding in the course of painstakingly putting the texts together.

Fielding questions from journalists, the man of God revealed that he was inspired by God to write the books which according to him, were written to address specific issues in people’s lives.

He encouraged Nigerians to cultivate the culture of reading books that will enhance their spiritual wellbeing.

Be the first to comment on "Runsewe, Pastor Balogun Admonish Christians On Reading Culture For Spiritual Well-Being"