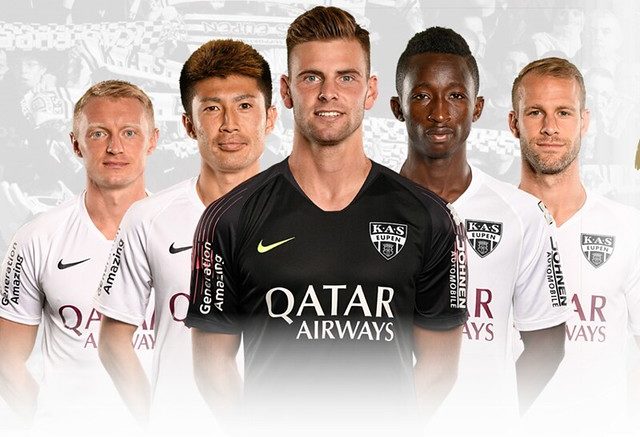 This agreement will see the airline’s logo proudly placed on the team’s playing jersey from the 2019/20 season.

Qatar Airways branding will also be placed around K.A.S. Eupen’s stadium. K.A.S. Eupen competes in the Jupiler Pro League, the Belgian First Division and has established a reputation for developing young talented footballers such as Moussa Wague and Henry Onyekuru.

Qatar Airways Group Chief Executive Officer, His Excellency Mr. Akbar Al Baker, said, “We are very pleased to announce this new partnership, which will see Qatar Airways become the main shirt sponsor of K.A.S. Eupen from the 2019/20 season. We are continually striving to boost our global sporting sponsorship portfolio, and this partnership is just one more example of our dedication to the sports sector and our belief in the power of sport to bring people together. Qatar Airways has strong ties with Belgium operating eight weekly passenger services to Brussels from Doha and 19 weekly all-cargo services to Liège. This partnership demonstrates our long term commitment to further growing and developing our relationship with Belgium.”

Qatar Airways Senior Vice President, Marketing and Corporate Communications, Ms. Salam Al Shawa, said, “We are delighted to add K.A.S. Eupen to our global football sponsorship portfolio. We look forward to working and engaging with the club and its fans to help make a real difference through this exciting new partnership. Sport is a key pillar of the long-term vision of the State of Qatar, and as Qatar’s national carrier, we welcome the opportunity to use sport as a means for youth development here in Qatar and around the world.”

K.A.S. Eupen Board of Directors Representative Dr. Andreas Bleicher, said, “We are delighted to announce our partnership with one of the most prestigious and awarded airlines in the world. Qatar Airways will be our Main Shirt Sponsor from now on, which puts our club within the remarkable global football club portfolio of Qatar Airways such as AS Roma, Boca Juniors, FC Bayern München and Al Sadd SC. Our professional team will wear the Qatar Airways logo on our jersey from now on. Our partnership is both incentive and commitment for us to stay in Belgium’s top flight league, to improve our professional to youth teams and also continuously develop our club organisationally and increase our social engagement. As a club we will support Qatar Airways´ ambition in the Belgian airline and tourism industry, so that it will become a win-win situation for both entities. We are looking forward to an exciting partnership with Qatar Airways”.

The national carrier for the State of Qatar currently operates a modern fleet of more than 250 aircraft via its hub, Hamad International Airport (HIA) to more than 160 destinations worldwide.

The airline has launched a host of exciting new destinations in 2019, including Lisbon, Portugal; Malta; Rabat, Morocco; Davao, Philippines; Izmir, Turkey; and Mogadishu, Somalia; and will add Langkawi, Malaysia; and Gaborone, Botswana, to its extensive network in October 2019 with Luanda, Angola; and Osaka, Japan, following in 2020.

Be the first to comment on "Qatar Airways Signs Partnership Agreement With K.A.S. Eupen Of Belgium"