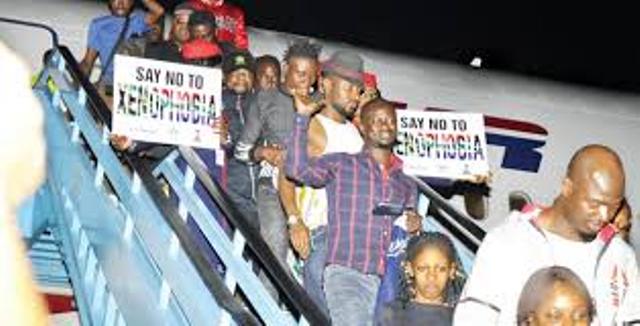 * Second batch of Nigerians from South Africa disembarking from the aircraft today at MMA,Lagos

Air Peace, Nigeria leading airline has evacuated the second batch of 315 Nigerians, who were affected by xenophobic attacks in South Africa.

The Boeing 777 aircraft with registration number5N-BWI arrived the Hajj and Cargo wing of the Murtala Muhammed Airport (MMA), Lagos at about 7.23 pm today.

The 315 that was evacuated today by Air Peace were to be airlifted yesterday (Tuesday) but was shifted to today; Wednesday as result of the initial refusal by the South African authorities to grant the airline landing permit

About 320 people were expected but five persons were said to have been dropped due to documentation related issues..

Meanwhile, the Chairman of Air Peace, Barrister, Allen Onyema today was in the House of Representative following the invitation extended to him by the Green Chamber the previous day’ Tuesday for evacuating Nigerians affected by the xenophobic attacks in South Africa. .