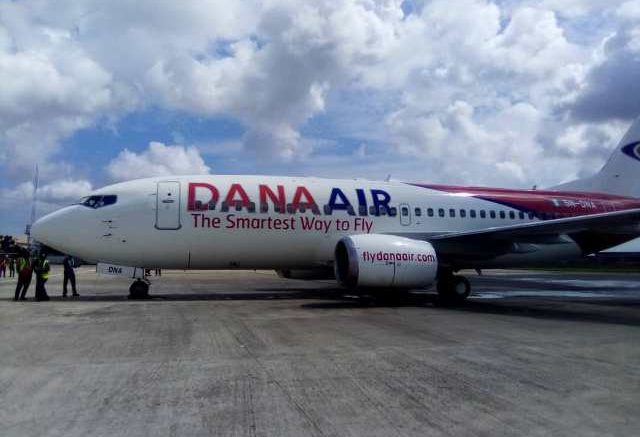 Nigerian Airline, Dana Air has given its strategic route expansion plan a push with the arrival in Lagos of one of its newly acquired Boeing 737 aircraft.

The Managing Director / Chief Executive officer of Dana Air Jacky Hathiramani in a statement said the aircraft arrived Lagos at about 1am on Friday.

He said Dana Air is committed to its strategic route expansion and fleet renewal plan, and its desire to continue to provide unmatched on-time performance, world-class in-flight services and seamless air travel to its teeming guests.

According to him, “Earlier in the year, we noticed that there were fewer aircraft in the country and less capacity to meet the demand at the time, so we decided to assure our guests that we will acquire some Boeing 737 aircraft to ensure that they travel at ease without having to worry if they will get flights to certain destinations even at peak periods. ” “The arrival of the first of our recently acquired 737 aircraft is a firm confirmation of our resilience, operational efficiency, deep passion, and our commitment to continue flying safe.”

“It also underscores our mission which to earn the loyalty and respect of our customers by consistently demonstrating our commitment to service, and providing affordable regional air transport services that focus on innovation, quality and service excellence.”

‘With our fleet size likely to hit 9 soon, we are ready to give more 737 rated Nigerian pilots and engineers the opportunity to be gainfully employed. We would also deploy this B737 to strengthen our existing route network while new routes will be announced soon in line with our careful and methodical route and fleet expansion project. * Dana Air staff celebrating the arrival of its first Boeing 737-300 at the weekend at MMA2,Lagos

The airline is reputed for its unrivaled on-time performance, world-class customer/ in-flight service and innovative online products and services

Aslo speaking, the Accountable Manager of the airline Obi Mbanuzuo disclosed that the aircraft was flown in from Italy, adding that with the delivery, the airline now has 6 airplanes in its fleet.

He added that at the end of the year the number of aircraft in the carrier’s fleet will rise to nine, adding that at the moment two of the airline’s airplanes have gone for checks abroad.

At the Murtala Muhammed Airport Terminal 2(MMA2),Lagos ,where the aircraft was received by Dana Air officials led by the Accountable Manager, Obi Mbanuzuo and the Media Communications Manager, Kingsley Ezenwa , the aircraft was welcomed with the usual water cannon to usher in the Boeing 737-300 series by two fire trucks from the Federal Airports Authority of Nigeria(FAAN).

Having flown over 4.5 million passengers in the last 11 years of its operations, Dana Air one of Nigeria’s leading airlines with daily flights from Lagos to Abuja, Port Harcourt,. Uyo and Owerri.