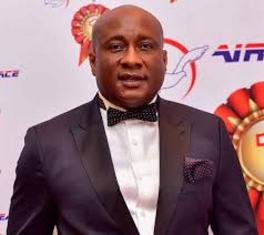 Anambra State Government has commended the founder and Chairman of Nigeria’s biggest carrier, Allen Onyema,for his unprecedented patriotic gesture in bringing back Free of Charge(FoC)187 Nigerians from South Africa threatened by the ongoing xenophobic attacks against African and Asian immigrants by South Africans.

The commendation is contained in a statement issued on Thursday in Awka, by the Anambra State Commissioner for Information and Public Enlightenment, Mr C. Don Adinuba.

Adinuba, explained that the state government decided to commend Onyema after a meeting in the Governor’s Lodge in Awka, the state capital .

According to him, “Onyema’s huge humanitarian gesture is the latest in a series of philanthropic activities by the Air Peace Chairman which Governor Obiano recognised in his public declaration last July 2, 2019 when he stated that Mr Onyema was driven by sheer patriotism rather than profit by starting direct flights into Dubai via Sharja in the United Arab Emirates at less than 50 per cent of the tariffs charged by foreign carriers”.

The Anambra State Government noted that “no persons, not even our suffering and frightened people in South Africa, sought free flights when Chief Onyema decided to offer one of his planes to the former apartheid country to bring our distressed people home at no charge to them.

“The flight must haverrrhaverr cost him at least 280 million in view of the fact that the machine spent an additional two nights in at Oliver Tambo International Airport in Johannesburg, causing the airline to pay more to the South African aviation authorities.

“We also note that Chief Onyema didn’t know any of the persons he lifted all the way from Johannesburg free. He was only moved by sheer patriotism and love of humanity, especially the downtrodden and the distressed.

“As already well known, Chief Onyema went into airline business five years ago to create jobs for Nigerians, enhance business opportunities in the industry for our citizens and enhance Nigeria’s presence in global business. He exemplifies the principle of solidarity with the human family and commitment to the common good,” the statement reads in part.

“The Nigerian people are far more united than most people seem to appreciate, It is only when we act as one, united family that we make progress and the world takes us  more seriously,” the statement also said.