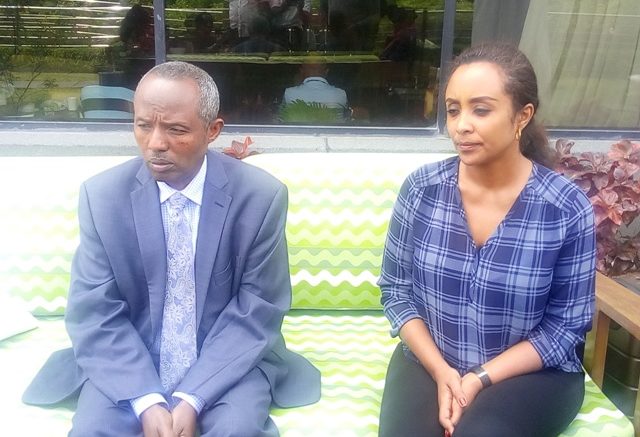 * From left : The Chief Operating Officer,, Ethiopian Airlines, Mesfin Tasew and the Country Manger, Nigeria, Firihiewot Mekonnen at the briefing

…Seeks Dependable Partnership On Hangar From Nigeria, Other African Countries

This is just as he said that the airline was in search of depending companies in Nigeria to partner with to establish an MRO that would maintain aircraft in the country and other West African countries and East Africa.

According to him, “We generate about $80 million but we want to maximise this because we are developing internal capacity on engines ,components and our revenue is expect to grow faster.”

This is just as he disclosed that Ethiopian Airlines MRO is supporting Nigerian carriers such as Arik Air and MedView Airline  with their maintenance, adding that as at yesterday Wednesday 28,2019, one of Arik Air’s airplanes still went for maintenance at the carrier’s hangar.

Ethiopian Airlines, he said has the largest MRO facility in Africa, as it maintains all Boeing models of aircraft except 747 and that the facility also repair Air bus A350 state of the art aircraft among other aircraft.

He said this while speaking to journalists in Lagos on Ethiopian Airlines MRO and what the airline intend to achieve.

The COO stated that for the airline to partner with any Nigerian company, the organisation must be interested in investing on MRO, must be committed, leadership potential, must have the capacity to facilitate  the local requirements  for the MRO and must have good  track record

He listed some of the airlines in Africa that Ethiopian Airlines MRO is supporting to include Arik Air, MedView, Asky, Rwand Air and Cam Air, Jumbo Air from Kenya and Malawi Airline, Congo Airways among others.

The COO argued that because establishing MRO is capital intensive, African airlines do not have such huge funds to set up one, adding that this situation necessitated Ethiopian Airlines to call for partnership among African Airlines.

He said that ET, as the airline is popularly called is capable of giving African Airlines MRO support by deploying its experts to the airlines  and by supplying the airlines  with spare parts, adding that most Africa airline are very small and as a result cannot afford their own MROs.

The COO posited that what Ethiopian Airlines is doing is to encourage African airlines to start creating their own MRO, adding that airline needs partners in both West and East Africa.

Tasew said that even if African airlines have the funds to establish MROs, it is not enough, as they still have to have the required aviation personnel, hence the partnership Ethiopian Airline is calling for.

He said that Ethiopian Airlines has established several airlines in partnership with some African governments.