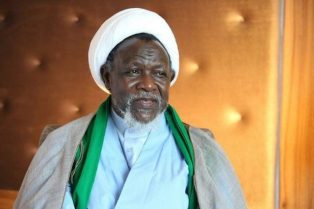 Leader of the proscribed Islamic Movement in Nigeria, Ibrahim El-Zakzaky and his wife, Zeenat, have returned to Nigeria from India.

El-Zakzaky and the wife returned to Nigeria barely four days after they travelled to India for medical treatment on the order of the Kaduna State High Court.

Recalled that on their arrival at the hospital where treatment was expected to commence, the trip turned controversial.

It was learnt that they were immediately taken the VIP section of the Abuja airport accompanied by operatives of the Department of State Services(DSS), making effort to take them to an unknown destination

Only on Thursday, spokesman of IMNL Ibrahim Musa had made known El-Zakzaky’s return.

The leader of IMN, had traveled to India along with his wife for a medical treatment.

El-Zakzaky in an unconfirmed video released yesterday, said he was given the option of having his treatment at the hospital or return to Nigeria.

El-Zakzaky said that while weighing the options with his wife, unnamed officials stormed his room and asked them to prepare to go home.

He had accused Buhari led government of frustrating his treatment in India. El-Zakzaky had also accused the federal government of placing him under heavy security, noting that Kirikiri prison was better than the Indian hospital.

In view of his allegations, IMN spokesman said, “Following lack of a breakthrough in the impasse that ensued in the treatment in New Delhi of Sheikh Ibraheem Zakzaky, it is now confirmed that the Sheikh is on his way back to Abuja,” the statement read.

“In a video message sent through his office, the Sheikh said it was decided that they will be taken to the airport to be flown back to Nigeria. He has left Delhi by 17:00 Nigerian time. He prayed that may that be the best option in the circumstances.”

“The Nigerian government’s interference and scuttling of the whole process rather than supervision as ordered by the court is the direct cause of the impasse. The government never wanted the medical leave in the first place, and did whatever to stop it by all means possible.”

Be the first to comment on "El-Zakzaky, Wife Arrive Abuja Airport"