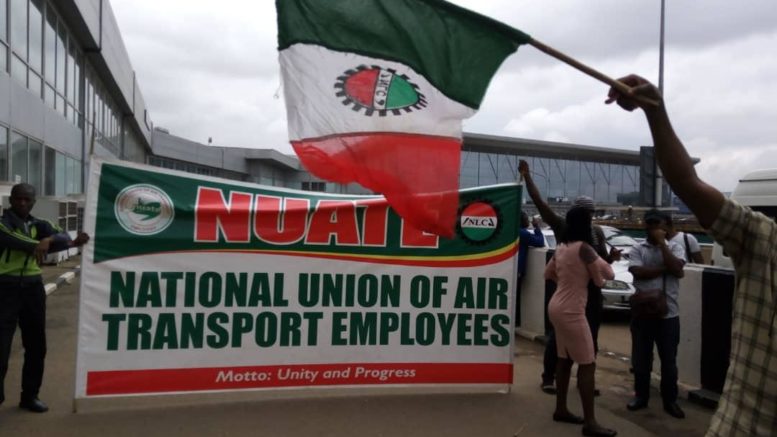 Members of the National Union of Air Transport Employees (NUATE) , Nigerian Labour Congress ( NLC) Lagos Chapter and the Nigeria Union of Railway Workers, today continued their protest against  the refusal of the management of Newrest ASL to reinstate  union leaders that were sacked 18 months ago for belonging to unions.

Earlier today the unions chanted solidarity songs in front of the premises of the catering service and vowing not to retreat as the management has refused to negotiate with the unions.

Speaking to journalists on the picketing, the General Secretary, NUATE, Ocheme Abba, said that the union has been on the issue for the past eight days, adding that what Newrest has done is inhuman and unlawful.

Ocheme said that there was no going back on the picketing because the management of the catering company has refused to speak to the unions, adding that the unions was currently laying siege at Newrest ASL and that the union has not achieved its aim  of picketing the company.

Ocheme asked ASL to respect the constitution of Nigeria Section 40 as well as recall the sacked union leaders in the company, adding that union leaders have been relieved about 18 months ago and that management cannot continue to victimise the workers.

On his part, General Secretary, Nigerian Union of Railway Workers, Segun Esan confirmed that the unions were at Newrest ASL in solidarity with NUATE to address an issue concerning the recalcitrant management.

He added that the action is a direct response to a breach perpetrated by Newrest ASL as it concerns the welfare and refusal to allow workers to unionise .

She stated that the unions would go back until they achieved their aim, calling on the management to ensure the welfare packages of workers are well taken care of that.

Some of the grievances the unions have against the company includes: refusal to recognize trade unions, refusal to allow employees exercise the fundamental right of freedom of association, victimisation and sanctioning of employees for joining union

Recalled that NUATE had written a letter to Newrest ASL management on July 30, 2019, asking the catering company to stop victimising and sanctioning workers and allow them to join the union of their choice.

Be the first to comment on "Industrial Dispute: NUATE, NLC Vow To Continue Picketing Newrest ASL"