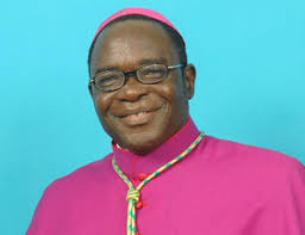 The Bishop of the Roman Catholic Diocese of Sokoto, Rev Father Mathew Kukah has described late Chief Michael Chukwuma Onyema as a true and detribalized Nigerian.

Rev Kukah said this at the Funeral Service organised for the late Chief Onyema also reiterated that he is very optimistic about the growth and progress of the country.

Eulogisimg the life of late Chief Onyema, Kukah said he is very optimistic about the growth and progress of the country.

Speaking further, the Bishop commended the Chairman/Chief Executive Officer of Air Peace Limited, Chief Allen Onyema for emulating the footsteps of his late father through his all inclusion system of employing people from all the Nigerian tribes

According to him, “I am a beneficiary of the complications of our country. That is why I have been very optimistic that the country will be good. I am supremely optimistic of Nigeria”.

Kukah stated that the country was constantly looking for scapegoats but that unfortunately, Nigeria is in a state of collective nervousness where they are all finding scapegoats, adding that the greatness of Nigeria is in its diversity.

In his words, “We need to know how to manage diversity and how to channel it to greatness. We are living in very turbulent times.”

According to him, “This is a celebration of life and it is always our desire to bury our parents at a very ripe age and not the other way round. You are welcome to Anambra State and I assure you safety because Anambra is the safest state in Nigeria”.

Earlier, Barrister Allen Onyema, the Chief Mourner attributed his success story to the vigilance and hard work of his late father, adding that his father was the type that does not see white and cal it blue.

He said that the father had always monitored his resources since 1990s, when he started job as a young man and hard taught him ways of integrity and uprightness.

Also in attendance were former Governor of Imo State, Mr Peter Obi, Senator Ben Obi, 10 Bishops from the Catholic Dioceses, captains of industries, politicians and people from all walks of life.

Chief Michael Chukwuma Onyema was born in 1932, exactly 87 years ago, to the humble family of Mr Alfred Onyema and Mrs Onujeme, Nee Okworogu, all of Mbosi town.

Be the first to comment on "Late Onyema A True, Detrabalised Nigerian–Bishop Kukah"