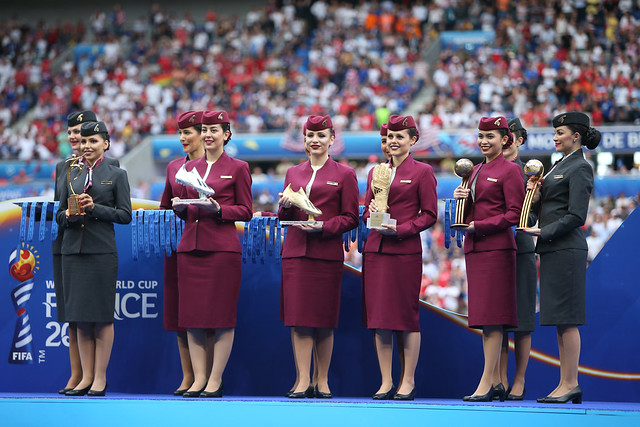 * Members of Qatar airways are seen on the stage with the awards following the 2019 FIFA Women's World Cup France Final match between The United States of America and The Netherlands at Stade de Lyon on July 7, 2019 in Lyon, France.

Qatar Airways, an Official Partner and the Official Airline of FIFA, has congratulated the USA on the outstanding win of the FIFA Women’s World Cup France 2019, following a month of football excitement throughout France.

Qatar Airways Group Chief Executive, Mr. Akbar Al Baker, said, “Women’s football is bigger than ever before, and the FIFA Women’s World Cup France 2019™ is the place where the hopes and dreams of many fans and supporters come true. I would like to congratulate Team USA on their win against Team Netherlands. We now look forward with tremendous anticipation to 2022, when a FIFA World Cup will be hosted in our home country, Qatar. As the national carrier of the State of Qatar, we could not be more proud as we prepare to welcome fans to our home and host city, Doha.”

In May the airline issued a new marketing campaign film supporting the competition, capturing the excitement of fans all over the world, who will be watching the tournament as well as the thousands travelling to France to cheer their national team.

The innovative film features a mother telling her daughter a wonderful bedtime story.

It is a ﬂight of imagination, in which she describes an amazing new land where women’s football reigns, where players rule and fans from many nations gather to cheer.

By the ﬁlm’s end, we realise that mother and daughter are in fact onboard a Qatar Airways aircraft ﬂying to the very destination she has been describing: a magical land, where the story of women’s football comes alive.

Qatar Airways Senior Vice President Marketing and Corporate Communications, Ms. Salam Al Shawa, said, “The spirit of the game was alive and well in this FIFA Women’s World Cup France 2019. The final match between Team USA and Team Netherlands had us on our feet with excitement; it was a sight to see. I want to congratulate the USA for their exceptional performance and commend them for showing young women and girls everywhere the heights that you can reach. We are incredibly proud to be the Official Partner and Official Airline of FIFA, and are looking forward to FIFA World Cup 2022.”

On top of Qatar winning the bid for the FIFA World Cup 2022 in May 2017, the award-winning airline announced its ground-breaking sponsorship deal with FIFA, which saw it become an Official Partner and the Official Airline of FIFA until 2022.

The airline’s partnerships build on its existing sponsorship strategy for the most popular sport in the world; as evident with its commitment to clubs in its own backyard and around the world. In 2018 Qatar Airways signed a five-year partnership agreement with leading German football team FC Bayern München AG, making the award-winning airline an FC Bayern München platinum partner until June 2023.

In 2019, Qatar Airways has become the first airline to win the ‘World’s Best Airline’ for five times and within a short period with the other times it has won; showing the airline constancy in providing the best for its passengers.

The airline will add Langkawi, Malaysia to its extensive route network in the second half of 2019.