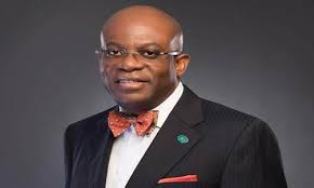 The Economic and Financial Crimes Commission called its first witness on Wednesday in the money laundering trial of the President of the Nigerian Bar Association, Mr Paul Usoro (SAN).

Usoro is being prosecuted before a Federal High Court, Lagos, for allegedly laundering N1.4bn belonging to Akwa Ibom State.

The witness, Udom Idongesit, a Relations Manager at the Aka Road Zenith Bank branch in Uyo, Akwa Ibom State, mounted the witness box on Wednesday after Justice Rilwan Aikawa dismissed an application by the Governor of Akwa Ibom State, Mr Udom Emmanuel, praying that the trial be adjourned indefinitely.

Emmanuel’s lawyer, Mr Ogbonaya Nwakwo, had urged Justice Aikawa to adjourn the trial sine die to allow the Court of Appeal determine the appeal filed by Emmanuel against the court’s ruling of May 30.

In the said May 30 ruling, Justice Aikawa had dismissed Emmanuel’s application challenging the jurisdiction of the court to entertain the charges against Usoro on the grounds that his (Emmanuel) name was mentioned as one of the persons who allegedly conspired with Usoro to allegedly launder the N1.4bn.

Emmanuel had contended that by mentioning his name, the charge had become invalid since as a sitting governor he enjoyed immunity from prosecution.

But Justice Aikawa had held that the fact that the governor’s name was mentioned in the body of the charges did not mean that he was a defendant in the case.

He thus, dismissed the application.

Displeased, Emmanuel’s lawyer, Nwakwo, said the governor had appealed and prayed the court to adjourn indefinitely to await the appellate court’s decision.

But the prosecuting counsel for the EFCC, Mr Rotimi Oyedepo, argued that the sine die adjourned prayed for was tantamount to stay of proceedings which Section 306 of the Administration of Criminal Justice Act; Section 40 of the EFCC Act and the Supreme Court had forbidden a trial court to entertain in criminal proceedings.

Besides, the prosecutor argued that since the court had pronounced that Emmanuel was not a party to the charge, there was no way he could ask for an adjournment.

In his ruling, Justice Aikawa agreed with the EFCC lawyer, paving the way for commencement of trial.

In her testimony, Idongesit, who was led in evidence by Oyedepo, told the court that sometime in March 2016 she went to the Akwa Ibom State Government House in Uyo on a “marketing call”.

She said while there, she overheard a conversation between Emmanuel and the state’s Accountant General on the need to pay certain sums of money to Usoro.

“This payment, I got to understand, should have gone to Access Bank. I took that as information for myself because the business I do basically thrives on information. I got back to my office and checked through the system to see if the defendant (Usoro) has an account with Zenith Bank and I found no such account existed,” Idongesit said.

She said following this, she made moves to get Usoro to open an account with Zenith Bank so that the money which Emmanuel spoke of could be paid to Usoro through Zenith Bank.

She said following her efforts, on March 10, 2016, “Aka Road branch of Zenith Bank was given a withdrawal instrument of N700m on the imprest account of the Akwa Ibom State Accountant General.”

Following this, she said she got Usoro’s contact from Emmanuel on March 14, 2016 “and I put a call through to him, that I had the payment of the defendant and he needed to open an account.”

“He instructed me to work with two of his colleagues. When I confirmed the exact names registered on the form, I sought the approval of my zonal head to open the account and made the deposit while waiting for documentation.

“I filled the deposit slip and the depositor’s name that I filled was Paul Usoro,” Idongesit told the court.

The court admitted in evidence and marked as exhibits the instructions given to the bank for the withdrawal of N700m from the Accountant General’s imprest account; as well as the documentation for the Zenith Bank account opened for Usoro.