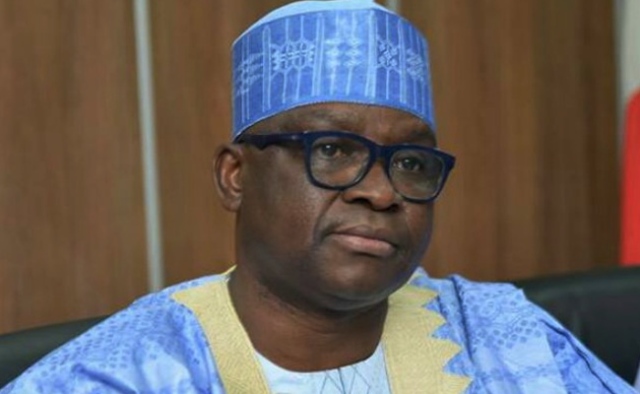 Justice Chukwujekwu Aneke, of the Federal High Court Lagos, on Tuesday ordered that the immediate past former Ekiti governor, Ayodele Fayose who was re-arraigned before him on N6.9bn fraud case, should remain on the exisiting bail conditions granted by former trial judge, Justice Mojisola Olatoregun of the same court.

The Economic and Financial Crimes Commission (EFCC) prosecuting the ex-governor on behalf of the Federsl Government re-arraigned Fayose for alleged money laundering, even as the court granted his application to travel to South Africa for medical treatment.

The current Trial Justice Aneke, also ordered the release of Fayose’s international passport and that the passport be returned to the court on September 16, 2019.

The re-arraignment followed the re-assignment of the case to Justice Chukwujekwu Aneke after the prosecution expressed loss of confidence in Justice Mojisola Olatoregun, who was previously handling it.

EFCC counsel, Mr. S. A. Adewale had told the court last Friday that the prosecution was not ready for the arraignment, prompting the adjournment of the matter till today.

Fayose was arraigned alongside a company, Spotless Investment Limited today, on the same 11 counts, with which he was charged by the EFCC on October 22, 2018,

He pleaded not guilty to all the charges and his counsel, Ola Olanipekun (SAN) applied that he should be allowed to continue to enjoy the bail earlier granted by Justice Olatoregun, to which the EFCC counsel, Adebisi Adeniyi raised no objection.

Justice Aneke consequently admitted the former governor to bail in the terms and conditions earlier granted by Justice Olatoregun.

Be the first to comment on "Court Re-Arraigns Fayose Over N6.9B Fraud, Grants Him Bail"