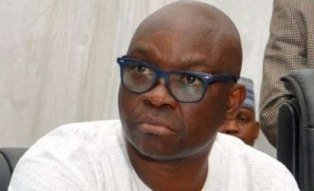 The Economic and Financial Crimes Commission (EFCC) today, told a Federal High Court, Lagos, that embattled former Governor of Ekiti State, Ayodele Fayose, is still under investigation by the Commission.

Fayose is being prosecuted by the EFCC over N6.9 billion fraud.

He was first arraigned on October 22, 2018, before Justice Mojisola Olatotegun, alongside a company, Spotless Investment Limited, on 11 counts bordering on fraud and money laundering offences.

He had pleaded not guilty to the charges and was granted bail on October 24, 2018, in the sum of N50 million with sureties in like sum, when he was first arraigned before Justice Mojisola Olatoregun.

However, the Chief Judge of the Federal High Court, Justice Adamu Abdu-kafarati had transferred the case from Olatoregun, to  a new judge, Justice Chukwujekwu Aneke, following a petition by the EFCC seeking a transfer of the case.

Fayose was billed for re-arraignment before Justice Aneke on Friday, but counsel representing the prosecution, Mr S. A Obafemi, had asked the court to adjourn the case to a further date.

He said that the commission was still investigating the defendant, adding that at present, there were no clear directives from the commission, on the steps to take

“The matter is coming up for the first time before this court and the information we gathered from our client (EFCC) is that the first defendant is still being investigated for other matters.

“The arraignment will not be possible this morning as we are yet to hear from the complainant, on further steps to be taken,” he said

According to Obafemi, the main prosecutor of the case, Mr Rotimi Jacobs (SAN), was absent in court, as a result of the situation.

He urged the court to grant an adjournment

Defence described the EFCC as a nominal party to the suit, and the Federal Government, the main party.

According to defence, there must be an end to litigation and the charge could not lie before the court in perpetuity, adding that the commission had began investigation of the defendant even before expiration of his tenure as governor.

Ojo specifically said: “The prosecutor has cited no law to back up this strange proposition of having this arraignment postponed, just because the prosecution is investigating the defendant for other cases.

“The court has a mandatory duty to prevent persecution of any criminal defendant, as this is the only way the integrity of the criminal justice system can be guaranteed,” he said

He urged the court to order the charge to be read over to Fayose.

In considering the prayer for adjournment, the court first frowned at the request, on the grounds that the charge was transfered to the court and was slated for re-arrsignment today, which is its main concern.

The judge, however, said that since it was not the main prosecutor (Jacobs) who appeared in the case, he would grant an adjournment in the interest of justice.

The court then fixed July 2 for re-arraignment.

Earlier. when the case was mentioned, defence counsel had informed the court that although they had filed application for a transfer of the case back to the former judge, Olatoregun, there were however, some developments.

Fayose’s counsel, Olanipekun (SAN) told the court that he had just been informed that the said judge was due for retirement sometime in November.

On that premise, the defence had urged the court for a 30 minutes stand down to enable them discuss with the defendant on his opinion on the situation .

Upon retuned to court after the stand down, the defence returned back to court and informed the judge that the application for transfer of the case has been withdrawn and that the defendant was prepared for re-arraignment.

The defence noted that even if the case file is sent back to the former judge, she would still not be able to conclude the trial before her retirement.

They had urged the court to proceed with re-arraignment, as the defence had no preference for any particular judge, but only concerned with the justice of the case.

It was at this point that the EFCC counsel (Obafemi) sort an adjournment for re-arraignment of the defendant, adding that the prosecution was also concerned with getting Justice.

During trial before Justice Olatoregun, the prosecution had called witnesses, from Zenith Bank, Diamond Bank, as well as a former Minister of State for Defence, Senator Musiliu Obanikoro.

According to the charge, on June 17, 2014, Fayose and Agbele were said to have taken possession of the sum of N1.2 billion, for purposes of funding his gubernatorial election campaign in Ekiti State, which sum they reasonably ought to have known formed part of crime proceeds.

Be the first to comment on "N6 9B Fraud: We Are Still Investigating Fayose -EFCC Tells Court"