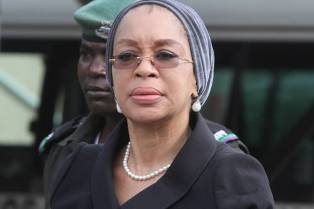 A Federal High Court, Lagos, today, dismissed a preliminary objection brought before it by a former judge of the court, Justice Rita Ngozi Ofili-Ajumogobia, challenging the jurisdiction of the court to try her over money laundering allegations for lacking in merit.

The court presided by Justice Rilwan Aikawa, while delivering a ruling on the application, held that contrary to the arguments put up by the former judge, she is no longer a serving judge as the process of her dismissal from the bench had been concluded.

According to the court, from the two exhibits tendered before it by the Economic and Financial Crimes Commission (EFCC) the National Judicial Council (NJC) had concluded disciplinary proceedings against Justice Ofili-Ajumogobia after which its recommended her sack.

Justice Aikawa also held that from the exhibit EFCC 02, which is a letter written by President Muhammadu Buhari to the Chief Justice of Nigeria (CJN) it can be clearly seen that the President had accepted NJC’s recommendation.

He also rejected the argument of Justice Ofili-Ajumogobia’s lawyer, Chief Robert Clarke that the exhibit “EFCC 02” is a document that can not be tendered and admitted in the proceedings.

Chief Clarke had maintained that the mere fact that the letter was addressed to the CJN and not to the NJC or the Chairman of the Federal Judicial Service Commission, makes it a private document.

But Justice Aikawa held that the fact that the letter was marked “restricted” did not rendered it inadmissible.

He noted that the letter is a public document and that it was send to the EFCC by the Secretary to the Government of the Federation with a cover letter.

The judge, therefore held that since Justice Ofili-Ajumogobia is no longer a serving judge when the instant charge was filed, the EFCC is within it’s right to try her.

Justice Aikawa also dismissed an application filed by Justice Ofili-Ajumogobia’s co-accused, Godwin Obla, (SAN) asking him to quash the charge or strike out counts one, two and three for being an abuse of court process or in the alternative, an order severing the trial.

But the judge held that after comparing the charge earlier filed by the EFCC before Justice Hakeem Oshodi of the Lagos State High Court and the one filed by the anti-graft agency before him he discovered that they are not the same.

He therefore held that the charge is not an abuse of court process as it is different in substance and content from the earlier charge.

The court also refused to separate the trial, it held that event had overtaken the request.

Justice Aikawa held that since he had dismissed the preliminary objection raised against the trial by Justice Ofili-Ajumogobia the coast is now cleared for the commencement of trial.

He said the delay that Obla complained about had been taking care of, so there is no need to separate the trial.

He then fixed October 24 for the commencement of trial.

Justice Ofili-Ajumogobia was re-arraigned before Justice Aikawa alongside, Obla on a 18-count charge of unlawful enrichment, illegal concealment, corruption, forgery and giving false information to an official of the EFCC.

The anti-graft agency alleged that the two defendants allegedly conspired to indirectly conceal the sum of N5, 000,000.00 in the Diamond Bank account of Nigel Et Colive Ltd, which sum they reasonably ought to have known forms part of proceeds of unlawful act to wit: unlawful enrichment.