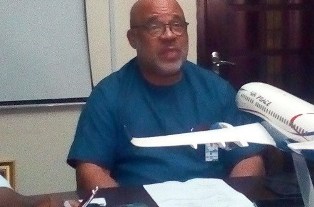 …Insists It Reported To NCAA

Air Peace has called for synergy among aviation agency as it concerns incidents and serious incidents.

The call is coming on the heels of the controversy generated by allegation by the Accident Investigation Bureau (AIB) that Air Peace did not report the incident involving its Boeing 737–300 aircraft with Registration Marks 5N-BUK,which occurred on May 15,2019.

This is just as the airline reiterated that it did not only filled and submitted the Mandatory Occurrence Reporting (MOR) but that it also reported to the Nigerian Civil Aviation Authority (NCAA) on May 16, 2019, declaring  that those saying otherwise are economical with the truth.

The Chief Pilot of Air Peace Captain Victor Egonu stated this while speaking with a select aviation journalist at the airline’s corporate headquarters in Lagos, yesterday.

He informed that the airline also contacted Boeing, the manufacturer of the aircraft about incident, adding that the importance the airline attached to safety cannot allow it to conceal the incident.

The essence of informing Boeing, the Chief Pilot stated was for the aircraft manufacturing giant to tell Air Peace the extent of the damage and whether the aircraft should be taken out or repaired in Nigeria.

He explained that the MOR that was sent on May 16,2019, was received by the regulatory body on May 17 of the same month ,less than 72 hours after the incident.

Capt Egonu said that he was disappointed with the allegation that the airline was trying to conceal the incident, adding that concluding that Air peace did not send the MOR to NCAA amount to being economical with the truth.

He argued that if AIB want the airline to report every MOR to it, it can  be arranged but that what the airline does not understand is the allegation that Air Peace did not report the incident , adding that it is far from the truth. Air Peace, he said cannot afford not to report the incident, saying that “We are one airline that go out of our way to ensure safety .”

According to him, ” We have 136 pilots and all these pilots undergo this recurrent training and some of them fail, but at Air peace, we give them the opportunity to retake the re-currency at no expense and if they fail again we then let them go.”

He contended that other airlines have had similar and even worse issues compared to Air Peace but that it was never mentioned the way that of Air Peace was reported .

In his words, “I think we should all be treated with the same hand. Can we be better yes, we can.The last thing we want is an accident for Air Peace or any airline in Nigeria, if accidents happen it affects all of us; airlines, passengers confidence levels drops and everyone’s passenger figures are affected. It affects everybody.”

He stated that airline had a burst tyre incident at Abuja Airport of recently and that it was changed, asking if Air Peace should also report burst tyre to AIB

“To bring u up to date…we had a tyre burst at Abuja airport and we change the tyre, now should we report a tyre burst to the AIB? AIB is trying to create a gray area.

What we don’t know is whether we should report tyre burst to AIB. The thing is that first it is a minor thing but  unfortunately it has happened and we just changed the tyres but the thing is AIB is trying to create a grey area, where what is the definition of serious incident or accident. I went through their books and there’s nothing here that talks about hard landing, so how do we define what is hard landing and what is reportable.”

He contended that Air Peace honestly felt that NCAA should decide who should bring in in the event of an incident or serious incidents.

“But we honest felt that NCAA can decide who to bring in or not.” Egonu said.

Speaking further, the Chief Pilot stated that the airline does not use internal instructors to conduct simulator training for its staff for neutrality, transparency and tribal sentiments

In his words, “ So, I find it very distasteful for people to say we are cutting corners.”

Air Peace, he declared is ever ready to invest in people and that it used Boeing Instructors in Morocco and London.

Be the first to comment on "MOR: Air Peace Advocates Synergy Among Aviation Agencies"