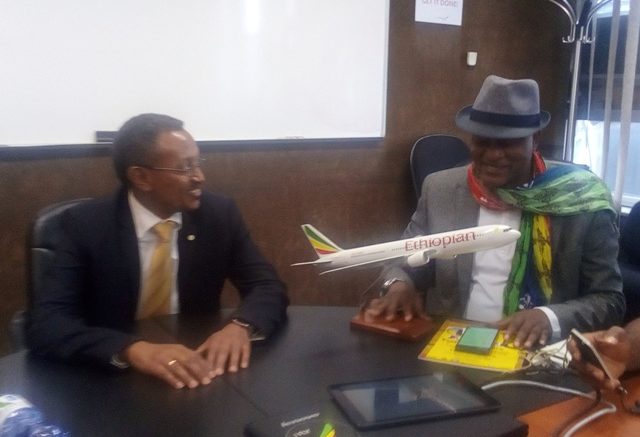 As the debate on why Ethiopian Airlines stopped operating into Kaduna International Airport continues, the Managing Director, International Services of the Airline, Mr. Esayas Hailu has stated that the carrier suspended its operation to Kaduna Airport not only because the traffic volume dropped but that the airline was developing the route at a cost.

Recalled that Kaduna  Airports was one of the airports Ethiopian Airline operates into before it was suspended after three years.

Esayas stated that the airline which operated into Lagos, Abuja, Enugu, Kano and Kaduna , had to suspended operation to Kaduna as the airline can no longer developed the route at a very huge cost, while the traffic on the route is low,  adding that it does not make economic sense.

He disclosed this in an interview with journalists after a tour of the airlines, facilities in Addisa Ababa, the Ethiopian capital. He however assured that the airline would return to Kaduna when the traffic volume on the route improves.

“We used to fly to Kaduna, we flew to Kaduna for three years, and then, the traffic volumes has not been forth coming, we have been developing it even at at a cost, we have spent spent lot of cost to develop it, but because it is in-between Kano and Abuja and we fly to both of the two places, the economic sense has not been guaranteed, we have to suspend it for the time being, but whenever the economics is justified, definitely we are going to go back there,” Esayas assured.

On why Ethiopian Airlines decided to operate multiple destinations into Nigeria, Esayas stated that the essence of these flights was not only to give the best value proposition to its loyal customers but to bring the airline’s service to the doorsteps of its customers in other states. According to him, “There are a lot of plans for the Nigerian market, first of all, we fly to four gateways into Nigeria, Kano, Abuja, Enugu and Lagos. This Is because we want to give the best value proposition to our loyal customers. This is because other people use to drive or fly from other parts of the country to fly from Lagos, so we have to go to their door steps. Secondly, Murtala Muhammed Airport (MMA),Lagos has a very big number of passengers, so parking space, slots, arrival and departure, embarking and disembarking passengers, so to reduce the burden, of the Murtala Muhammed Airport. It Is good to diversify the traffic to everywhere and those people coming from there, will be more convenient when we airlift them from there, It is also a good service for them and by so doing, we are dispensing justice to all the geo-political zones of Nigeria.”

Speaking on the Nigerian market in 2019, the airline’s Managing Director , International Services, disclosed that the second frequency to Lagos is being planned and that there is also a plan to connect Lagos across the Atlantic to the United States, adding that every decision is subject to the approval of  Nigeria government.

On the effectiveness of ET’s E-Visa process, Esayas said that it has helped to make travelling Ethiopia very easy. In his words, “The e-visa service has eased travel to Ethiopia by streamlining the travel process. It reduced waiting for visa, delay, cancelation (may be at the last time). We are now working on offering tourists attractive packages so that they can extend their say in the country and visit more tourist destinations. The automated visa service has contributed to Ethiopia’s tourism significantly.

We also saw modern simulators for training such as that for B737 Max, AirBus 350 and B777

Be the first to comment on "Why We Suspended Operations Into Kaduna Airport—Esayas, Ethiopian Airlines, MD"