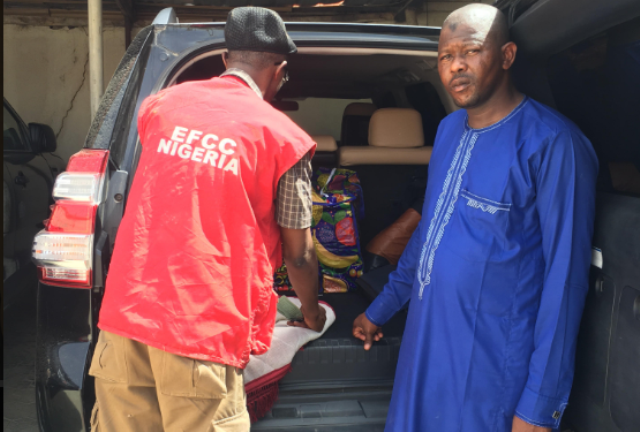 The Economic and Financial Crimes Commission (EFCC) today arrested a suspect alleged to be the brother to the Secretary to the Zamfara State Government, Professor Abdullahi Shinkafi with N60million cash.

The arrest is coming some hours to the handover to a new administration in the state and other states in the country.

According to EFCC, the suspect, Murtala Muhammad as at the time of arrest was also in possession of a Black Toyota Land Cruiser Prado Sports Utility Vehicle and one single barrel gun; one locally made Revolver Pistol.

His arrest, the anti- graft agency stated in a statement signed by Head, Media and Publicity of EFCC, Mr. Tony Orilade, was made at a housing estate was said to have followed a tip-off.

According to Orilade, the N60million was stacked in four bags with each bag containing N15million.

“The suspect Murtala Muhammad who is alleged to be a brother to Secretary to the Zamfara State Government, Professor Abdullahi Shinkafi, was arrested at No.145 Igala Housing Estate, Off By-pass Road, Gusau, Zamfara State, by the operatives of the commission.

“Items recovered from him at the point of arrest include: one Black Toyota Land Cruiser Prado Jeep with registration number DKA 67 PX Kaduna loaded with 4 bags of Ghana Must go containing N1,000 note of N15million each, totaling  N60million; one single barrel gun; one locally made Revolver Pistol, 25 rounds of cartridges and 12 rounds of 12.9mm live ammunitions.

“He will be charged to court as soon as investigation is completed,” the statement said.