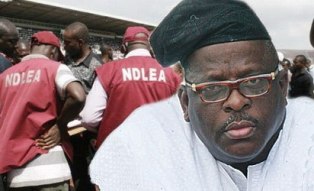 The Federal High Court, Lagos, presided over by Justice Chukwujekwu Joseph Aneke, has fixed June 6, for the hearing of an application filed by Mr. Buruji Kashamu, the Senator representing Ogun East Senatorial district of Ogun State, in the National Assembly.

The Senator in the new application is asking the court to reopen his suit against the Attorney General of the Federation and six others aimed at stopping his extradition to the United State of America (USA) to face drug related charges.

Kashamu is currently fighting the Federal government’s bid to extradite him to the USA where he is being wanted on alleged drug trafficking offence.

Other respondents in the suit are: the Inspector-General of Police (IGP), Lagos State Commissioner of Police, Department of State Security (DSS) and Attorney-General of the Federation (AGF).

At the resumed hearing of the matter on Thursday, Kashamu’s lawyer, Mrs. Ifeoma Esom, informed the court of his motion seeking to reopened hearing in the suit.

She told the court that her client’s motion to reopened the matter was based on the discovery of new facts which would assist the court in doing justice to the matter.

Responding, Mr. J .N Sunday, NDLEA’s director of Legal, admitted service of the application and told the court that he had already filed his response to it.

Sunday, however, call the attention of the court to the fact that the presence of the Attorney-General of the Federation (AGF) office in very important in the hearing of the application, adding that he doubt if the AGF office was served with the notice of hearing.

Based on Sunday’s submission and the agreement of parties, the trial judge adjourned the matter till  6th of June, 2019 for hearing of the application.

In the new application, Kashamu is praying the court to reopened hearing which had already been concluded in the matter. Esom said the application is predicted on the recent discovery of the Extradition (Amendment) Act 2018 which came to effect on the November 6, 2018 and which would be relevant to do substantial justice to the matter.

According to Esom, the Extradition (Amendment) Act 2018 provides ” 6A. Where a claim of mistaking identity is raised by a person who is a defendant in an extraction case and no evidence is led by the plaintiff or the requesting county To satisfactorily rebut the claim of mistaken identity as raised by the defendant , the court shall dismiss the application for extradition order and accordingly order the defendant discharged”.

However, NDLEA in its counter-affidavit to Kashamu’s motion, said the applicant has never been exonerated of complicity of any crime by any court in Nigeria, the US or the UK. Adding that both the British and Nigeria court never exonerate the applicant of any charge.

“That suit FHC/L/49/2010, has nothing to do with extradition as same was instituted as a result of a petition dated December 18, 2009 headed “Concerned Citizens of Ogun State” alleging the Commission of various criminal offences by the applicant.”

NDLEA also stated that the amendment contained in section 6A of the Extradition (Amendment) Act 2018 is published in an official Gazette and that the court can take judicial notice of same without having to reopened argument in the suit.

It was further stated that section 6A of the Extradition, (Amendment) Act 2018 was not made to have retrospective effect and that same have no relevance or bearing to the judgement or decision of the Bow Street Magistrate Court in 2003 or any other judgement.

The defendant averred that the application was brought in bad fate and that same has no place in the adjudicatory process.

Kashamu in the suit marked FHC/L/CS/930/18, has asked the Court for an order of perpetual injunction restraining all the respondents from arresting or detaining him in any matter whatsoever interfering with his personal liberty and freedom of movement on the basis of his lawyer letter dated May 23, 2018, wherein he protested the NDLEA’s invitation to USA to send a request for his extradition.

He had also urged the court for a declaration that the instructions given by the AGF to other respondents on May 25, 2018, in reaction to his letter dated May 23, 2018, wherein he protested the NDLEA’s invitation to the USA to send a request for his extradition to US, and the attempt and any further attempts by the first to fourth respondents to arrest him on the basis of the AGF’s said instructions are breach of his fundamental rights to personal liberty and freedom of as guaranteed by Section 35 of the Constitution of the Federal Republic of Nigeria as amended and article 14 of the African Charter on human and people of Nigeria.

However, NDLEA in its preliminary objection filed before the court by it’s Legal Officers, J. N. Sunday and Ichakpa Oigoga, had urged the court to dismiss Kashamu’s suit for being incompetent, as it failed to disclosed any infringement of his right. And for being an abuse of court processes.

The anti-narcotic agency in the affidavit in support of the preliminary objection deposed to by one of its litigation/exhibit officers, Kareem Olayinka, stated that the authority of the USA are currently seeking to have Kashamu extradited to their country to answer charges relating to the trafficking in heroin. And that the USA government had made the request sometimes in May 2015.

The deponent also states that since the applicant began get wind of the extradition request he has filed multiplicity of law suits relating to the issue.

He urged the court to dismiss Kashamu’s suit as it failed to disclose any cause of action against AGF, for violation of his rights and that the multiplicity of actions continuously filed and maintained by the applicant against NDLEA is intend to annoy and divert its energy and attention from discharging its mandate to the nation.

He also stated that it is apparent that Kashamu is only engaged in shopping for forum that will grant his desire relief by his multiplicity of his actions.

Be the first to comment on "Court Fixes June 6, Hearing Of Kashamu’s Motion On His Extradition To US"