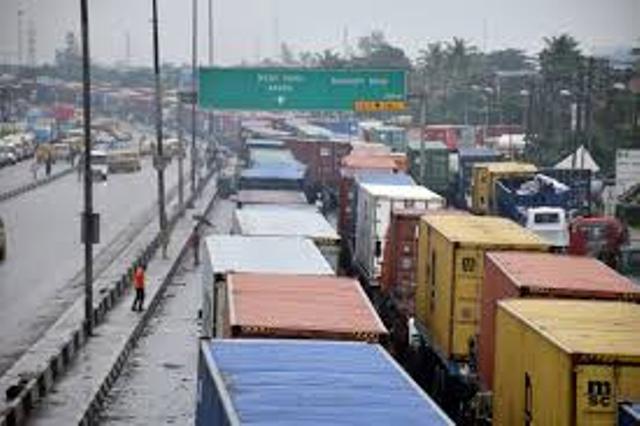 The Presidency has ordered the  immediate clearance of the Apapa gridlock and the restoration of law and order to Apapa and its environs within 14 days.

The Presidency also directed trucks and tankers operators to vacate the Port Access Roads within the next 72 hours.

The Presidency gave the directive in a statement signed by the Senior Special Assistant to the President on Media and Publicity, Office of the Vice President, Laolu Akande today in Abuja.

The directive mandated the immediate removal of all trucks from the bridges and roads within Apapa and all adjoining streets leading into the Apapa axis.

According to the statement, the directive was as a result of an emergency meeting convened by President Muhammadu Buhari and chaired by Vice President Yemi Osinbajo, SAN, on the 25th of April, 2019.

According to the statement, “The meeting proffered lasting solutions to the gridlock around the Lagos Ports, as the traffic congestion has continued to restrict all operations and livelihood in the area.”

The Presidency explained that before the directive was given, key heads and representatives of relevant Ministries, Departments and Agencies (MDAs) of government, including the Honourable Minister of Power, Works and Housing, Mr. Babatunde Raji Fashola; Inspector General of Police, Mr. Mohammed Adamu; representative of the Chief of Naval Staff, Rear Admiral B.E.E Ibe-Enwo; Permanent Secretary, Lagos State Ministry of Transportation, Dr. Salaam Taiwo Olufemi; and the Executive Director, Marine and Operations, Nigerian Ports Authority (NPA), Dr. Sokonte Davies, among others were at the meeting.

“Consequently, a Presidential Taskforce, chaired by Vice President Osinbajo was established to restore law and order to the area within 2 weeks.

“The Taskforce, which will report directly to the President, has included on its Terms of Reference the development of an efficient and effective management plan for the entire port area traffic, including the cargo, fuel distribution and business district traffic; enforcing the permanent removal of all stationary trucks on the highway, and the development of an effective manual truck call-up system, pending the introduction of the electronic truck call-up system.

“It also includes the implementation of a workable Empty Container Return and Export Container Truck Handling Policy, amongst others,”Akande  said in the statement.

He listed members of the taskforce to include : former Commissioner of Transport in Lagos State,Mr. Kayode Opeifa, as the Executive Vice Chairman, a representative of the Presidential Enabling Business Environment Council (PEBEC), the Nigerian Ports Authority (NPA); and the Nigerian Shippers’ Council (NSC).

Other members are : a special unit of the Nigeria Police Force led by a Commissioner of Police, representatives of the Truck Transport Union, the Lagos State Government through the Lagos State Traffic Management Authority (LASTMA), and other relevant MDAs. Akande also said that the Nigerian Navy and all other military formations have also been mandated to withdraw from traffic management duties in and around the Apapa axis, while military and paramilitary checkpoints in front of the ports and environs are to be dismantled.

The statement stated that,  “In addition, LASTMA has been authorised to move into Apapa as the lead traffic management agency, while the NPA is to commence the immediate use of the Lilypond Terminal and Trailer Park A as a truck transit park.

The  statement also mandated all to security personnel and MDAs to comply with the directives, while heads of the Nigerian Ports Authority, Nigeria Customs Service, Federal Ministry of Power, Works and Housing, and all other security operatives are to ensure their officers’ adhere to the new directives.

Be the first to comment on "(Breaking): Presidency Orders Clearance Of Apapa Gridlock"