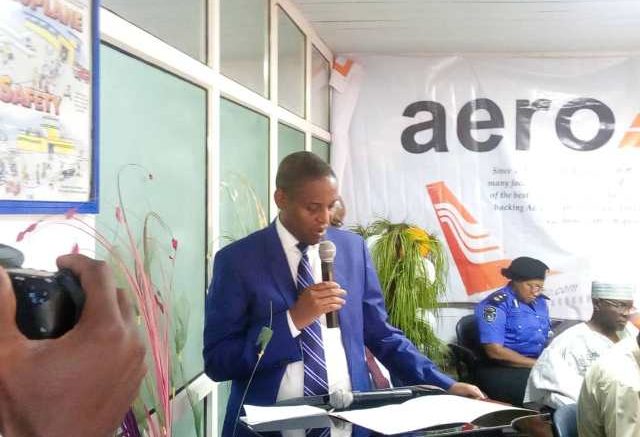 Aero Contractors, the oldest airline Nigeria has stated that it has secured approval from Ghana and Democratic Republic of Congo to maintain their B737 Classic airplanes and also

The airline, who said its vision, is not only to regain its prime position of excellence but to also dominate the domestic and regional routes.

As part of part of its 60th celebration, Aero said it would give 60 free tickets to its passengers.

The Managing Director of Aero, Captain Ado Sanusi said this today at an event to celebrate the 60th anniversary of the airline, which was established in 1959 at its headquarters at the Murtala Muhammed Airport (MMA), Lagos.

The Managing Director stated that the airline services returned to full operations in December 2016  and that it had grown it fixed wing operational aircraft from one to four , adding that it was the intention of the airline to grow it bigger that . According to him,”It was our expectation to grow our fixed wing aircraft to six by the close of this year. The present count of four aircraft improved our domestic flight operations to 32 daily flights.

Aero, he stated had successfully conducted three C-Checks on B737 Classics aircraft relying on 100 per cent indigenous engineers with technical support from Messrs AJW/SAA Technics as Aero’s Technical Partners.

He revealed that its AMO has gotten approval from Ghana Civil Aviation Authority (GCAA) and the Democratic Republic of Congo to maintain their B737 Classic airplanes, adding that this comes with huge multiplier economic and technical capacity deliverables not only to Aero but to Aero’s host state and Nigeria.

Aero’s MRO, he stated was also in talks with Cameroun and Mali on the possibility of maintaining airplanes from the two countries.

The Aero boss added that due to intensive ongoing regional consultations, the AMO’s leadership in aircraft maintenance, stamps Nigeria firmly into a destination of choice for comprehensive aircraft maintenance – capable countries in West and Central Africa like Ghana and Democratic Republic of Congo.

He added that it is the intention of the airline to retain enough technical capacity to emerge as a reference point for aircraft maintenance.

On charter operation, which the airline was also known for, Sanusi said that Aero plans to dominate the Gulf Guinea oil and gas operations. She assured that many of the airline’s staff who left when the airline was going through hard times would be re- employed when they come back.

According to her, “Aero is the back bone of aviation in terms of technical know-how and passenger service. We have to go through a difficult period .But the confidence the passengers have in Aero has returned.”

Be the first to comment on "Aero Secures Approval To Maintain Ghana,Congo Aircraft, Celebrates 60Th Anniversary"