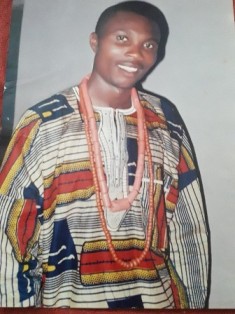 John Lucky is an Edo State-born indigene, who fled with his wife and children for the sake of their lives.

If any soothsayer had told Lucky John that he would one day flee with his family from his country of birth and become a sojourner in another, he would have doubted it.

However, reality is starring Lucky John in the face, as circumstances has compelled him to flee with his family

Narrating his ordeal after he lost his mother on February 18, 1983 and father on November 20, 2014,Lucky stated that he was raised by his grandmother in another town after the demise of his mother and that the only time he stepped his foot in the village  was during his father’s death and burial.

Narrating further, Lucky, who is married with children, said that after the funeral of his father, he was told that for him to inherit his father’s properties, he should become the chief priest of a cult, which his late father was the head.

According to him, “I had only one sister when my mother died. My grandmother raised me after I lost my mother. When my father died, as the first child of the family it was mandatory that I attended his funeral. After the event, I returned to my grandmother’s village. After my father’s burial, I was invited to the village on December 24, 2014. When I got there, I was taken to a place where an altar had already been set. I met many people, some draped in flowing red and black robes. They asked me to sit on a chair that was vacant. I obliged. They began to reel out the conditions to become the chief priest.”

He continued, “First, they made it clear to me that my father had made me the heir to the headship of the cult and it is on the condition of taking over as the chief priest that I will inherit his property. Again, they said I should offer my wife as a sacrifice.

“Fear gripped me. I told them I would not do that; one I am a Christian and my Christian faith forbids me to shed blood; two, I love my wife and I can’t afford to lose her and three, I need my wife around to raise my children.

“They threatened that I will not have peace in the village should I fail to do their bidding. Since they were more in number, I mustered all the energy in me and stormed out of the place.”

Continuing his story, Lucky said he continually receive death threats from members of the cult.

He added that when the threats was becoming too much and for fear that he may be killed, he seek advice from his friend, who according to him advised him to reported the matter to the police but  that when he eventually reported the case, the police did not take any action.

In his words, “A friend of mine advised me to lodge a complaint with the police. I did but the police said I had no proof of the allegation. They told me to go home and resolve whatever issues I had with them.”

Lucky stated that despite leaving the village and returning to where he was staying with his family, the death threats continued.

Speaking further, Lucky said, “My wife too was also not spared of the threats. I started talking and when they sensed that I will reveal their secret, they sent people, who attacked me physically. Having survived that attack, I ran away.”

He stated that out of fear of being killed with family, Lucky said he advised his wife to relocate with the children while he also left home.

“I moved from one place to another, staying with friends. At a point I realised that I had gone round all my friends; adding my problems to theirs was not a wise thing to do. I asked myself how long I would continue to live like a fugitive. I didn’t know what else to do than to leave home,” he lamented.

Be the first to comment on "The Travail Of John Lucky"