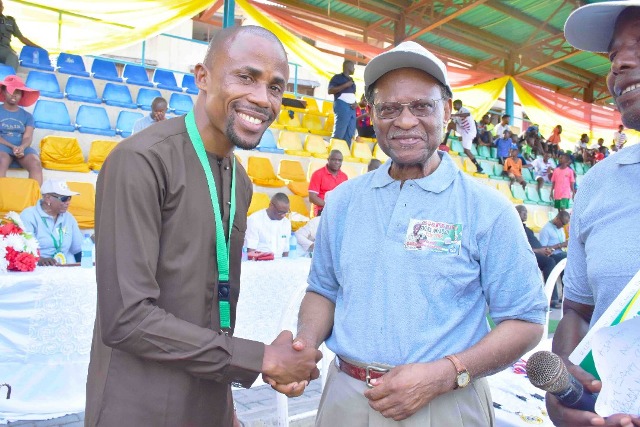 * Air Peace Corporate Communications Manager, Mr. Chris Iwarah (left) in handshake with former Secretary-General of the Commonwealth, Chief Emeka Anyaoku after receiving a medal from the latter in recognition of the airline’s support for youth development during the finals of the 12th edition of the Annual Under-16 Inter-State Emeka Anyaoku Cup in Lagos on Sunday

Former Secretary-General of the Commonwealth, Chief Emeka Anyaoku has praised the commitment of West and Central Africa’s biggest airline, Air Peace to youth development in Nigeria.

Anyaoku made the commendation on Sunday during the finals of the 12th edition of the Annual Under-16 Inter-State Emeka Anyaoku Cup in Lagos.

He urged Air Peace to sustain its support for youth development projects, adding that the nation needed to invest more in its young people to ensure its well being.

Anyaoku affirmed that the tournament instituted in his honour by the National Youth Soccer Association and supported by Air Peace had continued to positively impact the youth.

He said some of the participants had been exposed to life-changing opportunities.

The former Common Wealth boss presented a medal to Air Peace as a symbol of recognition of its role in youth development in the country.

Speaking at the event, Air Peace Chairman/Chief Executive Officer, Mr. Allen Onyema, said the carrier would continue to distinguish itself as a pro-youth organisation.

Onyema, who was represented at the event by Air Peace Corporate Communications Manager, Mr. Chris Iwarah, said the airline had provided massive opportunities to positively channel the creative energies of the youth.

He said the airline, which would soon launch its international flights to Sharjah, Dubai, Johannesburg, London, Houston, Guangzhou and Mumbai, would continue to support efforts aimed at projecting a positive image for Nigeria.

He described Anyaoku as a worthy Nigerian who had brought honour to the country and should be celebrated.

Air Peace, he said, would continue to identify with projects conceived to celebrate Anyaoku’s distinguished service to the country.