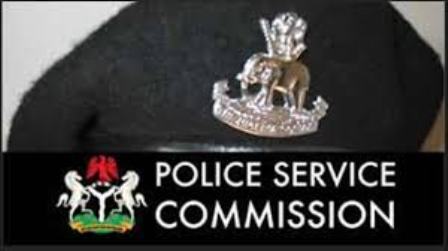 The Police Service Commission (PSC) has approved the dismissal of nine and the demotion of six senior Police officers for gross misconduct with immediate effect.

The PSC spokesman, Ikechukwu Ani, who disclosed this in a statement yesterday ,explained that this was part of the outcome of the fifth plenary meeting of the Commission presided over by its Chairman, Musiliu Smith(rtd) Inspector-General of Police in Abuja on March 26 and 27, 2019.

The statement added that the Commission also approved ‘severe reprimand’ for five officers and ‘reprimand’ for another five, adding that one of officer, a Commissioner of Police, , Austin Agbonlahor was, however, exonerated.

The Commission further requested the acting IG to furnish it with information on the punishment meted out to other officers mentioned in the Police Investigation Reports involving Abare with regard to irregularities in the conduct of the 2011 recruitment exercise.

Others who were also dismissed according to the statement are : DSPs Osondu Christian, Samson Ahmidu and Pius Timiala who would be prosecuted, adding that their promotion from Deputy Superintendent to SP had been withdrawn.

“Oluwatoyin Adesope and Mansir Bako had their ranks reduced from SP to DSP, while Gbenle Mathew,; Tijani Saifullahi, Sadiq Idris and Alice Abbah were demoted from DSP to ASP,” the Commission said .

The Commission stated that its decisions had been conveyed to the IG for implementation in a letter signed by the Permanent Secretary and Secretary to the Commission, Nnamdi Mbaeri.

Be the first to comment on "Misconduct: Nine Police Officers Dismissed, Six Others Demoted"