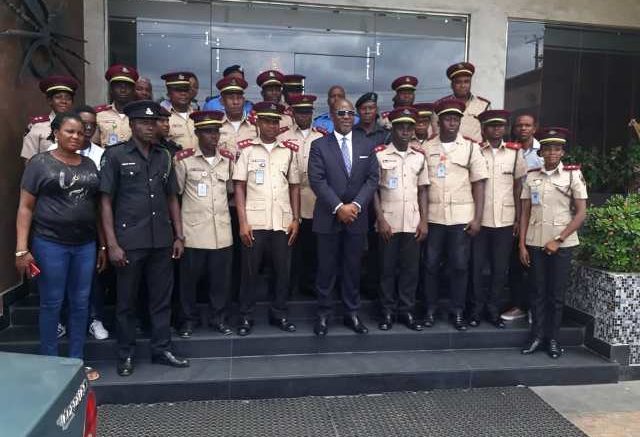 Accident Investigation Bureau (AIB), a body saddled with responsibility of investigating air incidents, serious incidents and accidents,in collaboration with its UK partners have commenced training for security agencies personnel in Lagos and Abuja.

According to the Bureau, the training is part efforts to train security agencies personnel on how to prevent people from tampering with evidences that would aid successful accident investigation findings,

The two-day workshop, with the theme: ‘Air Disaster Management.’ which commenced on Monday in Lagos and ended yesterday, focused on protection of investigation evidences by first responders who in most cases are personnel of security agencies.

No fewer than 400 personnel, drawn from Nigeria Police and Federal Road Safety Corps (FRSC) were trained in Lagos and Abuja by top officials of the bureau and its partners from the United Kingdom.

About 200 FRSC and police officials were trained in Lagos alone, while the other 200 would be trained in Abuja next week. The General Manager, Security and Safety, AIB, Mr. Olumide Osineye, who was one of the instructors at the workshop, said that the training of the security personnel would create awareness across the country on the importance of securing crash sites.

Osineye said that the training would enable the trained security agencies’ personnel to know and understand their roles in case of an accident, stressing that they would also be able to identify and appreciate the need for protection and preservation of evidences to aircraft accident investigation.

“In order to help and support AIB investigation, we hold it a duty to ensure that such category of trained personnel or organisations are aware of such critical component. These people are necessary for their education and awareness of their job,” Osineye added.

Osineye further explained that it was not the first time AIB would be organising such a workshop for security personnel, adding that the bureau recently organised training for some police officers in the country.

According to him, “Now, we are going beyond that to include the road safety officials because we know the FRSC too plays a role when accident occurs. These are field people. The education is important for us to do our job better. These people will have been on site before we get there. So, it is important for us to make them aware of this. We need to appreciate them in helping us to do our investigation.” * Inspector Seye from Airport Police Command and other participants at the training .

He commended the Commissioner of AIB, Engr. Akin Olateru, for ensuring that security personnel in the country were trained on air accident disaster management, stressing that this would go a long way in improving the performance of the bureau.

The General Manager, Security and Safety pointed out that the feedbacks received so far from the previous trainings were encouraging, assuring that this would also add to the knowledge of the personnel.

He emphasised that apart from Lagos and Abuja, the training would extend to other airports and stations across the country, noting that the importance of AIB in enhancing safety in the country’s airspace could not be over-emphasised

Speaking further, he said, “The impact of AIB is great. First and foremost, all stakeholders are working towards the same goal. We are making a big leap to ensure that our safety investigation findings go a long way. What we do is that we ensure that the kind of accident we investigated for instance, does not recur again. However, the aim of AIB safety recommendations or investigations is not to apportion blame or obtain liability, but specifically for safety.”

Be the first to comment on "AIB, UK Partners Collaborate To Train Security Personnel In Lagos, Abuja"