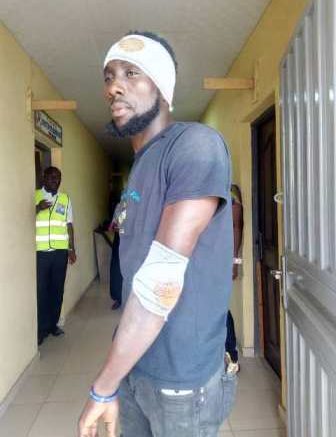 * Chairman of the Caverton branch, Comrade Tony Ibibe with bandage on his head and hand

.… As Motorists Groan Over Traffic Build Up

Aviation unions comprising of the Air Transport Services Senior Staff Association (ATSSSAN), the National Union of Air Transport Employees (NUATE)  have blocked the roundabout close to the toll gate at international wing of the Murtala Muhammed Airport (MMA),Lagos, over the beaten of a Caverton Helicopter staff by men of the Rapid Response Squad (RRS) for protesting against refusal of Caverton to pay them their redundancy entitlement.

The unions, who blocked the road with their vehicles, were singing solidarity songs accusing Caverton of using RRS to assault their members instead of paying them their redundancy package.

The stated that an injury to ne is an injury to all, wondering why Caverton should bring in RRS when the Airport is under Airport Police Command. As early as 9am, the three unions mobilised their members and barricaded the Lagos Airport Access Road, thereby creating heavy traffic on the road.

AbelNews observed that within some minutes after the unions blocked the Access Road , traffic immediately started building up ,to the extent that at 11. Am the traffic has extended to Beesam Police station.

As the traffic build up grew, motorists, who could not comprehend what was  going, had to turn back at the roundabout close to the station.

Speaking on the redundancy issue, the 1st National Deputy President of NUATE, Comrade Markus Moses Ogil, stated that when the management decided to embark on redundancy, it was agreed with the union that immediately they were disengaged, all the affected workers would be paid but that that was not the case, as the Caverton management went ahead to disengage the workers without paying them.

He added that Caverton still refuse to pay despite explaining to them what the labour law says about redundancy. * Union members during the protest today

According to him, We have talked to them on why they should not go against the labour laws, our members were laid off without following due process, when we engaged them, we took a line of reconciliation, which we say this people if you are going to lay them off lets engage ourselves in what we call redundancy arrangement which was never respected and after so many notice that this was the right thing to be done, the management were indifferent”.”

He continued, “The law about redundancy agreement when it is agreed upon is that it should be paid before the staffs are laid off, if you do not have the resources, do not lay the staffs off until you are ready to do that, by saying go without giving them what is due, how will they cope with the current challenges in Nigeria”.

Attempts to reach the management of Caverton to state its own side of the matter proved abortive.

Contacted, the General Secretary of NUATE, Ocheme Abba said that trouble started when NUATE went to picket Caverton and that the rotary wing firm unleashed RRS on union members beating and injuring 12 of them.

He added that apart from the fact that the union members were manhandled, they sustained injuries and were also detained by RRRS

The NUATE scribe hinted that the protest this morning at Lagos Airport was to demand for the release of union members, adding that they have since been released by RRS.

He however stated that the main issue that brought about the picketing and manhandling of union members has not been resolved.

The General Secretary of NUATE said that the union met the Ministry of Labour on the issue but that the meeting did not yield fruitful results.

Be the first to comment on "Redundancy: Unions Protest Assault Of Caverton Staff By Police, Barricades Lagos Airport Road"