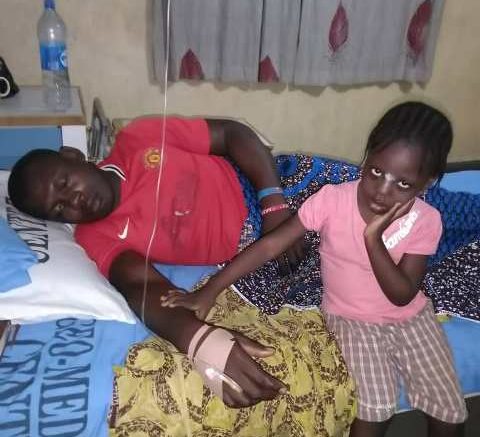 * Tersuu Orhemba, on his hospital bed at the Surgical Emergency Department of the Lagos State Teaching Hospital(LASUTH),Ikeja

…As Eye Witness Accuses Police Of Colluding With Suspect

The Airport Police Command may be on the verge of creating another bad image for the police if it fails to arrest the attacker(s) of Tersuu Orhemba, a staff of the Nigerian Aviation Handling Company (NAHCo) while on lawful duty five days after the attack

Recalled that Tersuu was attacked on Wednesday, April 3, 2019, allegedly in the presence of Customs.

The recent development is coming barely three days after the Police from Anti-Cultism Unit of the Lagos State Police Command created bad image for organisation by shooting and killing one Kolade Johnson, the child only of his parents in Lagos on Sunday, March 31,2019

The late Johnson was hit by a stray bullet fired by one of the policemen while watching a football match at 1, Beco Street, Onipetesi, Mangoro Bus Stop.

At NAHCo end of the Murtala Muhammed Airport (MMA),Lagos, a source, close to NAHCo told AbelNews that Tersuu was on duty when he was hit on the head by unidentified persons and collapsed and was immediately rushed to the hospital by those who were around.

Narrating what happened, the source that on getting to the hospital, it was disclosed by medical officials that Tersuu had internal bleeding in the brain and will require surgery to clear blood stains in the brain.

The source added that Tersuu is lying critically ill in an undisclosed hospital.

The source also told the online platform that NAHCo Aviance would have to investigate the incident thoroughly to apprehend the attacker(s) to  guarantee safety of other employees of the organisation.

AbelNews learnt that the attacker is a staff of one of the so – called ‘big boys’ in cargo clearing and forwarding, adding that NAHCo security officers reported the matter to the Police.

The source hinted that Policemen from NAHCo station came and wanted to affect the arrest of the suspect but that some cargo agents prevented the Police from arresting him.

Speaking further, the source told AbelNews that the Police went away, as they could not affect arrest.

The source added that the ground handling company security department followed up the matter by drawing the attention of the Divisional Police Officer (DPO) of the station to the incident but that the DPO told NAHCo that Police had written to the company, where the alleged attacker works to present him for interrogation.

According to a source, who witnessed the incident, “Our Security Manager was forced to ask whether that would be the same position of the Police if the victim who is still lying critically ill in the hospital awaiting surgery should die. Would they be sitting down waiting for the company to produce the alleged culprit who was known to the Police and for an act that took place in the presence of Customs officers and other NAHCo staff, who were ready to testify even as the attack was captured on the CCTV? That is the update. The victim is lying critically ill in the hospital. The police has been unable to arrest the individual responsible for the attack.”

The source added that up till Monday morning the suspect, who is well known to both the Police and Customs has not been arrested by the police, adding that from all indications, the Police may be colluding with the company where the suspect work to ensure that the attacker is not arrested.

NAHCo Aviance is escalating the case beyond the DPO and Airport Police Command,” another angry source, who saw it happen, added.

Contacted Command’s Public Relations Officer(PRO), Joseph Alabi said he has been attending meeting but that he would get in touch with the DPO of NAHCo and get back to AbelNews .

The Image maker of NAHCo ,Mr .Tayo Ajakaye could not be reached for the organization’s official reaction.

Be the first to comment on "Airport Police Yet To Arrest Attacker Of NAHCo Aviance Staff, Tersuu Orhemba 5 Days After"