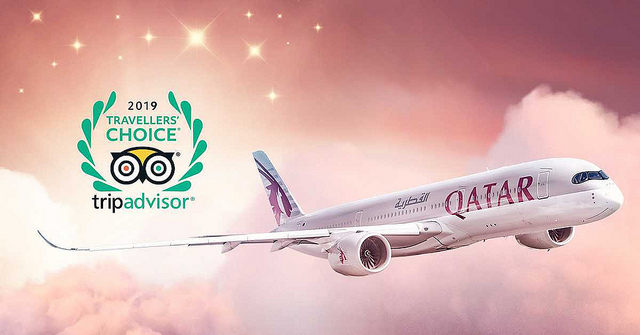 The TripAdvisor Travellers’ Choice Airline Awards are based on millions of honest reviews from travellers around the world and reflect best service, quality and customer satisfaction.

Speaking on the awards, Qatar Airways Group Chief Executive, His Excellency Mr. Akbar Al Baker, said, “Thank you to all our passengers who awarded us with these six Travellers’ Choice Awards. We are delighted that our continued pursuit of excellence is recognised by TripAdvisor travellers around the world. This is a ringing endorsement for all the hard work that our team has put in to serve our customers.

“This year’s achievements by Qatar Airways in the Travellers’ Choice Airline Awards demonstrates our promise to set the highest standards and deliver the absolute best quality of service to our passengers. These awards are some of the most respected accolades in travel and to be awarded ‘World’s Best Business Class’, in addition to the Middle East awards for ‘Best Airline’, ‘Best Major’, ‘Best Business Class’ and ‘Best Economy Class’ as well as being named as one of the ‘World’s Top 10 Airlines’ is an incredible and proud achievement for Qatar Airways.”

TripAdvisor is the world’s largest travel site with more than 730 million traveller reviews of hotels, airlines, restaurants and attractions, making TripAdvisor one the most recognised names in the travel industry. Airline reviews are based on customer ratings of seat comfort, leg room, in-flight entertainment, customer service, value for money, check-in and boarding, and cleanliness, in addition to an overall rating of the airline.

Qatar Airways operates a modern fleet of more than 250 aircraft via its hub, Hamad International Airport (HIA) to more than 160 destinations worldwide.