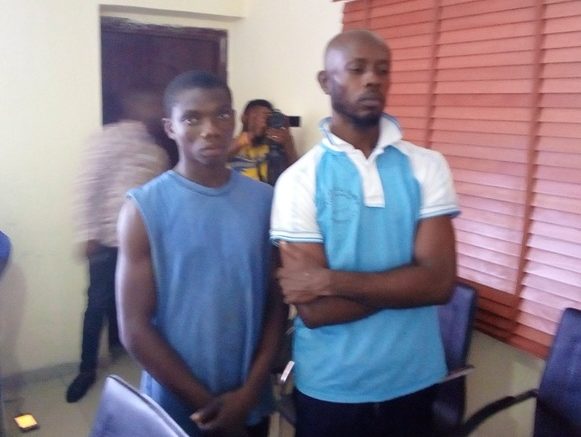 The National Inland Water Ways Authority (NIWA) is to arraign a boat operator Balogun Oriyomi and the driver Solomon Gbenga for allegedly ferrying 12 school children from Government Secondary School, Tarkwa Bay to Osborne for schools event without life jackets on them.

The General Manger, NIWA, Lagos, Engr. Muazu Sambo, who disclosed this to select journalists today, explained that the boat operator and the diver were accosted during a control inspection and that surprisingly none of the school children the boat was conveying wore life jacket.

He added wearing a standard life jacket is an essential requirement for water transportation and that it is mandatory, adding that it is he only tool that helps to ensure the survival of lives in the event of a mishap.

Muazu stated that as result of the breach, the boat operator and the driver of the impounded boat would be charged to court under extant laws to serve as deterrence to other operators in the industry.

According to him, “We have lost so many lives from boat mishaps that every necessary steps must be taken to protect further loss of lives on our water ways.”

* Students alighting from the impounded boat

NIWA, he further stated would not relent in its determination to monitor the activities on the inland waterways with routine and control inspections, adding that the authority would seek maximum lawful penalties for those, who violate safety measures on the waterways.

The management of NIWA, he said is pained and saddened by the action of the boat operator and the driver considering the huge resources the authority has spent on sensitisation and enlightenment on the need for operators  and passengers to be safety conscious at all time .

The NIWA General Manager disclosed that to demonstrate the seriousness the authority attached to safety, it visited 38 private jetties in the course of its sensitising campaign.

It is disheartening that despite the sensitisation, we can still see boat carrying passengers without life jackets. Life jacket will ensure you are floating on water at least for an hour in the event of a mishap before rescue comes.” On what happens to the management of the school who allowed its students to embark on such journey, he said that the management was invited by NIWA Police and released on bail.

Speaking on the importance of life jacket, Muazu said, “We have made it clear to boat operators that if a passenger refuses to wear a life jacket, he should not be allowed inside the boat.”

Meanwhile, NIWA General Manger said that investigation on the matter was ongoing .

Be the first to comment on "Life Jacket Breach: NIWA To Charge Boat Operator, Driver To Court"