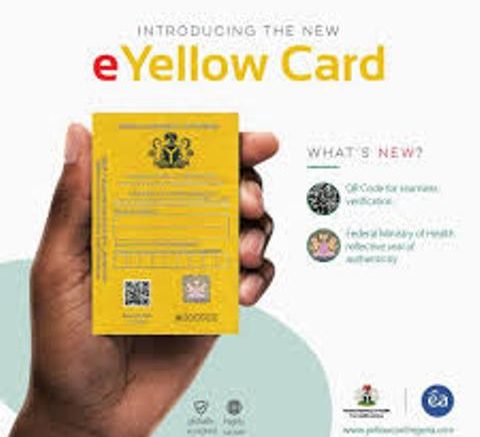 The programme  came as the date for the full implementation of the use of Electronic Yellow (E-Yellow) cards in Nigeria draws near.

The sensitization programme, which took place on Tuesday in the Conference Room of the airport, Lagos

Speaking at the event, the officer in charge of PHS facility at the Lagos airport, Dr. Abdulai stated that the sensitisation programme was  in accordance with the directive of Federal Ministry of Health that Yellow Cards of passengers traveling out of Nigeria, to  countries where the yellow card is required, must be checked  with Q-R scanners, effective from April 1, 2019 to prevent embarrassment to Nigerians abroad.

“It is expected that Nigerians must travel with only E-yellow cards to countries where it is required from 1st April, 2019,” Abdullai said.

The Yellow Card known as International Certificate of Vaccination or Prophylaxis, is a proof of evidence for vaccination against yellow fever and any other vaccine preventable infections (polio, meningitis)

According to the new rule, it must be taken at least 10days before the expected day of departure

Recalled that the Electronic Yellow Card known as E-Yellow card was introduced by the Federal Government of Nigeria through the Federal Ministry of Health in 2018.

The e-yellow card is a physical card with basic information such as name of the traveller, passport number, date of birth, card number, Vaccine given, date of vaccination, which are registered on Port Health Services website–www.yellowcardnigeria.com

Speaking at the event, representatives of foreign airline operators commended the Federal Government and PHS for coming up with the sensitisation programme, lamented that the burden of passengers arrested with fake or invalid yellow cards falls on the airlines as they pay heavy fines to the destination countries.

They appealed to the Federal Government to allow the old and e-yellow cards till the end of 2019, but that the government should embark on an intensified awareness campaign through the media to ensure that every Nigerian travelling abroad realised that e-yellow card is one of the vital documents they must take along whenever they are travelling outside the shore of the country.

According to airlines, “We have to commend the Federal Government of Nigeria and the Ports Health Services (PHS) for embarking on this awareness sensitization programme on the full take off of the use of E-Yellow card in Nigeria. We have to say this that we foreign airlines are the most affected anytime a passenger is deported for travelling with invalid or fake yellow card.”

“We would like to implore the Federal Government to please extend the deadline of the acceptance of the old yellow card till the end of this year.” they added

Those who attended the event include: representatives of foreign airlines operators in the country, Federal Airports Authority of Nigeria (FAAN), ground handlers and security agencies attached to the aviation industry.