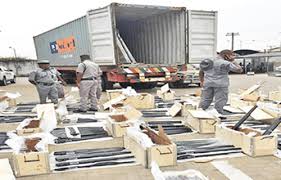 The trial of three Nigerian business men and a company, who allegedly imported 1, 570 pump Action Rifles into the country, between June 6 to 20, 2017, resumed today at the Federal High Court , Lagos.

The defendants in the matter are, Ifeuwa Moses Christ, Ayogu Great James, Emeka Umeh Festus, who is at large and a limited liability company, Great James Oil and Gas Limited.

Giving evidence before Justice Saliu Saidu today, a prosecution witness, Mr. Ayodele Joseph Rotimi, a Chief Superintendent of Customs (CSC), while being led in evidence by the prosecutor, Mr. Julius Ajakaiye, told the court how on September 2017 6, at about 3 pm a call came through from the Customs Intelligence Unit, CIU, that a container was found at terminal B1, of the Tincan Island Port, Lagos laden with arms and that the Enforcement Unit should mobilised men and materials to the site.

He said on getting to the place, the container was found opened and that his team also confirmed that the container actually contained arms.

Ayodele said his team then requested for a letter to be made to the Terminal Manager to provide logistics to transfer the container to the Enforcement Unit.

He added that the container was subsequently transferred same day at about 6 p.m necessitating the shifting of the 100 per cent examination till the next day.

The witness further stated that during examination, the entire content of the container was off loaded and stocks taken while the serial numbers of each of the rifles were taken.

Ayodele said that after the discovery of the arms-laden container, the Customs observed a trend of containers coming in from Turkey and that this necessitate the Area Comptroller of Customs directing his men to be on top alert by ensuring that the manifest of all cargoes from Turkey are properly scrutinised.

The witness said that while keep watching of cargoes coming from Turkey, another container bearing the name of the first consignee , Great James Oil Gas Limited was also discovered.

Ayodele added that after counting and taking stocks of the items in the containers with the serial numbers of the rifles written, the Area Comptroller directed that the two containers be handed over to the Federal Operation Unit (FOU) of the Nigerian Customs Service, Ikeja, Lagos, where the items in the containers were recounted and the serial numbers of the rifles re-confirmed and a handing over and taking over letter was signed.

Meanwhile, further hearing in the matter has been adjourned till April 2, for continuation of defendants’ trial.

The Nigeria Customs Services (NCS) had earlier arraigned three men and a company before the Federal High Court in Ikoyi, Lagos, for allegedly importing 1,570 pump action rifles into the country illegally.

The defendants, Ifeuwa Moses Christ, Ayogu Great James, Emeka Umeh Festus, who is at large and Great James Oil and Gas Limited, an oil and gas company, were arraigned before Justice Saliu Saidu.

They were accused of conspiracy, illegal importation of firearms, forgery and altering of Customs’ import documents.

The offences, according the prosecutor, Julius Ajakaiye, a Deputy Director in the Federal Ministry of Justice, are contrary to and punishable under Sections 3(6), 1(14)(a), 1(14)(a)(i), 1(2)(c) of the Miscellaneous Offences Act Cap. M17, Laws of the Federation of Nigeria, 2004.

The accused, however, pleaded not guilty to the charges.

The prosecutor said the defendants conspired among themselves between September 6 to 20, 2017, illegally and unlawfully imported a total of 1, 570 pump action rifles into Nigeria, through Apapa Seaport, Lagos.

Ajakaiye explained to the court that the defendant, in a bid to bring in the weapons unlawfully, altered and forged a bill of lading, issued in July 28, 2017, to read Guandong, China, instead of Istanbul, Turkey, which was written on the conveying container.

The defendants were also alleged to have altered a forged bill of lading numbered ISB0281398, issued in July 28, 2017, to read 230 packages of washing hand basins and W/C, as the content in the container used in shipping the illegal firearms.

Following the arraignment, the prosecutor urged the court to remand all the defendants to prison. Although the prayer was opposed by the defence counsel, but the court ruled in favour of the prosecutor and ordered their remand in prison, as the charges against them borders on threat to national security.

Dissatisfied with Justice Saidu’s ruling, the defendants headed to Appeal Court, challenging the ruling but their appeal was dismissed.

Be the first to comment on "Illegal Importation Of 1570 Pump Action Rifles: Cargoes Originated From Turkey–Customs"