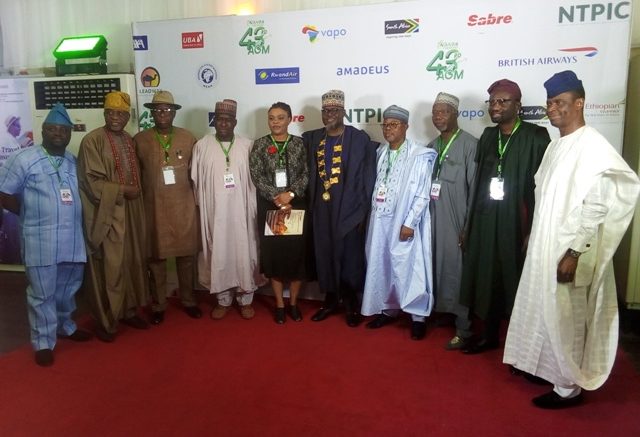 * The the National President of NANTA, Mr Bankole Bernard and other dignitaries at the association's 43 AGM at Muson Centre, Onikan ,Lagos, today.

…As NANTA Bill Reaches Third Reading At House Of Reps.

The Director General of National Council for Arts and Culture (NCAC), Otunba Olusegun Runsewe has stated that the inability of Culture and Tourism practitioners to promote and market the country’s cultural festivals and tourism sites as the major challenges facing the industry

This is just as he said that tour and travel practitioners no longer package tours at low period when there are cheaper fares.

Speaking further Runsewe pointed out that another major challenge the culture and tourism industry has is unhealthy competition among tourism practitioners, adding that there is nothing if a practitioner specialises in Argungu while the other Osun Oshogbo and another in Igue Festival. According to him, “ We must avoid unnecessary rivalry and unhealthy competition .We must build a united country that will give us a better Gross Domestic Product (GDP).

NANTA, posited was more into travel but that in the true sense of it , culture and tourism cannot be separated.

According to him, “Tourism is life while culture is a way of life”

The NCAC Director General stated that instead, what these practitioners do is to package all the festivals that come their way, adding this is not the way to go.

He called on NANTA not to see its AGM as a ritual but to use it to build a strong culture and tourism industry.

The NCAC boss commended NANTA for making efforts to sanitise the travel agency business by introducing the Nigeria Travel Practitioners Identity Card(NTPIC), stating that though NANTA was misunderstood in some quarters, the project was necessary to prevent quacks from taken over the business.

He contended that he did not understand NANTA was pursuing until he travelled to the United States, adding that today no American travel out of US without going through a travel agent. Speaking on the suspension of the Argungu Fishing festival by the Kebbi State government, NCAC Director General stated that the consequences of suspending a festival for some years was grave , adding that it would take another 20 years to bring back the event .

Earlier, the National President of NANTA, Mr Bankole Bernard, revealed that in the last one year, the association has focused on advocacy and enactment of the NANTA bill at House of Representatives, adding that presently the bill is moving very fast as it is now at the third reading .

The NANTA boss , who thanked the invited guests for honouring the assocaition’s invitation, also stated that in the last 12 months, NANTA had been working closely with the Nigerian Civil Aviation Authority(NCAA)to eliminate fake and illegal travel agencies .

According to him, “This singular act has reduced the number of counterfeit travel agencies around but has not completely eliminated them. We hope that with the measures put in place we would have an almost perfect downstream sector with special emphasis on sharing of information and data within the industry,”

The association, he said also worked with the International Air Transport Association (IATA), the global body of agency licencing and accreditation with the introduction of NewGen ISS IATA Settlement System, which introduces new categorisation and better flexibility in payment.

Be the first to comment on "NANTA 43 AGM: Runsewe Attributes Lack Of Promotion, Marketing Bane of Culture/Tourism Development"